Who Are Ya: Hiroki Kuroda (Third Time's A Charm)

Share All sharing options for: Who Are Ya: Hiroki Kuroda (Third Time's A Charm)

I'm finally able to get on SBNation after two days without even being able to get a page to load. I think this will go down in the history books as "The Great SBN Outage of 2013". It seems like people are slowly starting to get the site to load so we'll take a quick look at Hiroki Kuroda for the third time this season. The first two previews are here and here. The last time Kuroda faced the Blue Jays was April 25th, back when Toronto wasn't good (but that's no longer). He got the win in a 5-3 Yankee victory which was also the deficit the first time the Jays faced Kuroda, although he received a no-decision in that game. He faced Mark Buehrle on the April 25th occasion as he will again tonight.

In the April 25th game, Kuroda went six innings giving up six hits, a walk, and three earned runs striking out three Blue Jays. The Blue Jays were actually leading 3-0 in the second inning before remembering that their goal is to disappoint the fans which lead to them surrendering five straight unanswered runs. As Kuroda did in the first match-up, he mainly threw the three S's in the form of sinkers, sliders and spliters. This is what that looks like, as you can see it's sliders to the glove side and sinkers to the pitching arm side. 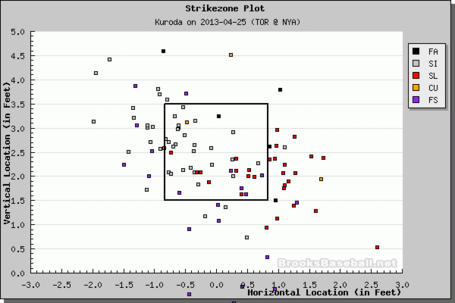 Once again Jose Bautista couldn't hit Hiroki Kuroda's slider to save his life as he went down swinging to the pitch in the second inning. 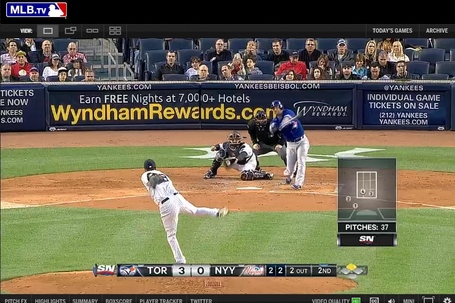 Hiroki Kuroda gave up two home runs that evening, both coming on sinkers up in the zone. You'd have to think the Blue Jays will be sitting on his elevated sinker up in the zone tonight as well. Here's where the sinker that Edwin Encarnacion hit out of the park in the first inning was located. 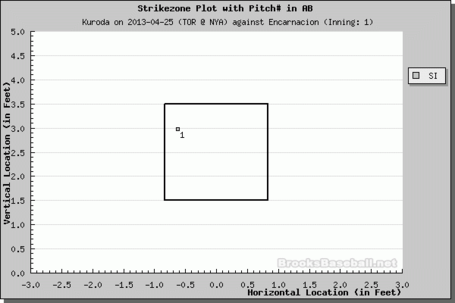 Last time the Blue Jays faced Kuroda, Adam Lind was having a baby (not him, his wife). As I said in the first preview:

"Even with his great splitter, Hiroki Kuroda is still worse against lefties (.310wOBA) than righties (.281wOBA), meaning Adam Lind should definitely start today."

If getupkid can't access the site today, some of you other folks may have a chance to "Find the Link":

Find the link between Hiroki Kuroda and the representative of Japan in the 1964 (pretty sure wikipedia has it wrong and it was actually 1960...) women's Olympic shot put competition.

It'd be swell if the Blue Jays continued their winning ways against the evil Yankees tonight.