Who Are Ya: CC Sabathia (Take Two)

Share All sharing options for: Who Are Ya: CC Sabathia (Take Two)

The Blue Jays attempt to avoid a sweep at the hand of the devil Yankees today. CC Sabathia goes up against R.A. Dickey in a battle of the aces. Sabathia faced (and beat obviously) the Blue Jays on April 27th going 8 innings giving up 3 earned runs from 9 hits with 4 strikeouts and no walks. The Blue Jays used no left handed batters against CC Sabathia on that occasion which was pretty impressive lineup management by John Gibbons and company.

If the Blue Jays want to beat Sabathia today they'll have to avoid swinging at pitches like this slider that Rajai Davis hacked at for strike three. 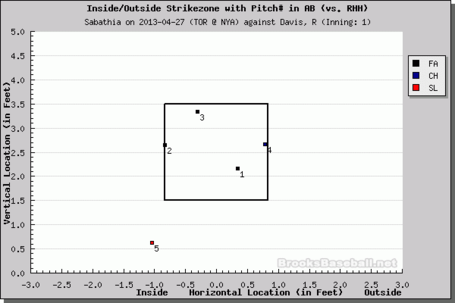 A lot of Sabathia's fastballs this year have been right down the middle of the plate early in the counts so it wouldn't be a bad idea to swing aggressively early in the at-bats as Jose Bautista did for his home run last time he faced Sabathia. 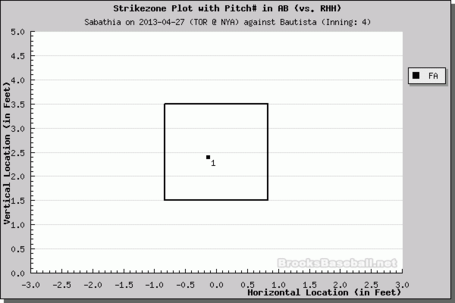 Brett Lawrie's home run also came on a fastball right down Broadway. It's a little surprising Lawrie got so many fastballs in the at-bat as it looks like the book is out on his struggles with sliders. Don't be surprised if he faces many more off-speed pitches this afternoon. 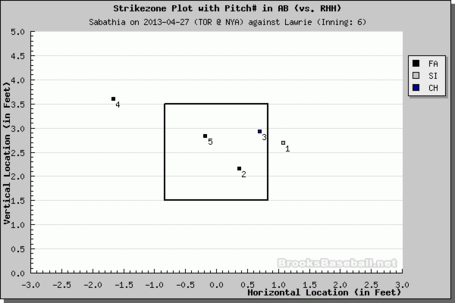 Should Lind Play: NO NO NO

There's no way Lind gets into the lineup today against such a tough lefty. Still looking for suggestions for a better daily feature.

Find the link between CC Sabathia and a setting on your TV you should use when watching the game on Sportsnet to avoid Pat Tabler's creepy laugh.

It's a nice Sunday today so go out and enjoy it! Or don't and scream at the TV all day. Either way, have a good one folks!