Who Are Ya: Ryan Dempster

Share All sharing options for: Who Are Ya: Ryan Dempster

Ryan Dempster takes on J.A. Happ today throwing the Blue Jays rotation order completely out of whack. The Canadian veteran right hander has pitched 30 innings this season allowing 11 earned runs. He also an impressive 43 strikeouts so far, which is much higher than his usual K rate.

As with Clay Buchholz yesterday, Ryan Dempster throws a four-seam fastball, a sinker and a cutter. He complements those pitches with an off-speed offering that includes a slider and splitter. So far this season, Dempster has gotten a massive amount of swings and misses with his splitter against lefties, so hopefully Lind and Rasmus can lay off of it tonight. The Canadian actually turns 37 tomorrow, and is probably arriving at the end of his long playing career. His free agent contract with the Red Sox lasts from 2013-14 so it wouldn't be surprising if he hung up the cleats after next season. As you can see his velocity has slowly trended downwards as he's gotten older: 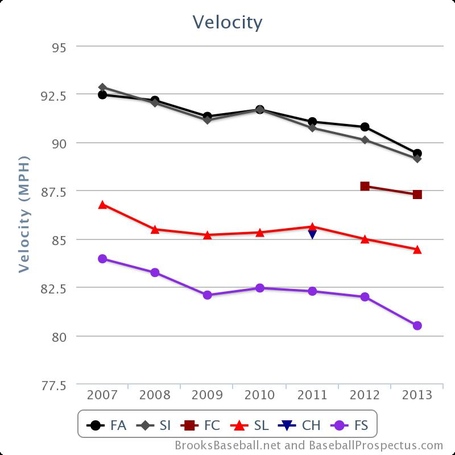 While using the splitter to retire left handed batters, Dempster uses the slider on the outside half to get right handed batters out. This has been a problem so far this season for the swing happy Blue Jays, so hopefully they can lay off some pitches this evening. 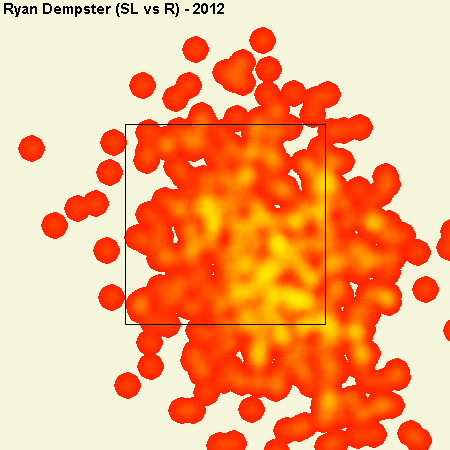 Although Ryan Dempster had reverse splits in 2012 and also so far this season, the sample size probably isn't big enough to read too much into it. His splitter usage has been pretty consistent his whole career, so it's not like he has a new pitch throwing the numbers out of whack. Over the course of his career, lefties have an extra 44 points of wOBA against him so Lind should definitely start today. If he does indeed start, it will be the first time he's ever faced Dempster. Also a note to Adam, so far this year almost 60% of Dempster's first pitches to left handed batters have been fastballs, so don't be too patient tonight.

Jumbotron Factoids are still M.I.A. but they will be back soon enough! Today's "Find the Link" is:

Find the link between Ryan Dempster and the actor who played Rod Tidwell from "Jerry Maguire".

Enjoy the game as the Blue Jays go for the series win tonight!