Who Are Ya: Jake Odorizzi

Share All sharing options for: Who Are Ya: Jake Odorizzi

This should be fun as we get to see well-hyped prospect Jake Odorizzi's first start in a Tampa Bay uniform and his third start ever in the major leagues. In case you forgot, Odorizzi was involved in the Zack Greinke trade in 2010 and then most recently the James Shield and Wil Myers trade this year with the Royals.

In eight starts at AAA Durham, Odorizzi has an ERA of 3.83 and a K/9 of 9.47. He mainly throws a four-seam fastball, curveball, slider, and changeup. He also has thrown two-seamers and cutters in the past although pitch f/x doesn't recognize them as such. Odorizzi's fastball, which he relied heavily on during his two MLB starts last year, tops out in the low 90's.

The changeup is said to be Odorizzi's most unrefined pitch, with it almost exclusively being thrown against left handed batters on the outer half. 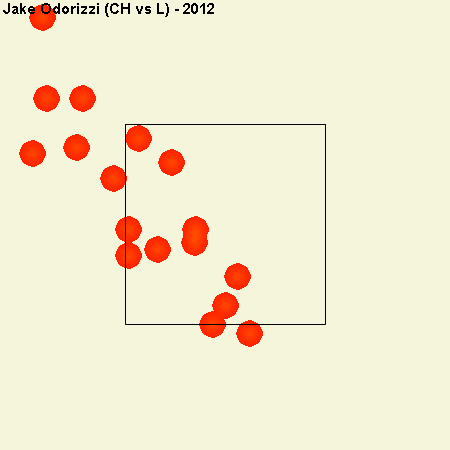 Jake Odorizzi has more effective weapons to attack same handed batters in the form of his more refined slider compared to his changeup against lefties. Combined with the fact that his minor league splits lean slightly towards being tougher on righties result in a definite start for Adam Lind and the newly groomed Colby Rasmus.

EDIT : With Anthony Gose being recalled, I no longer have a clue how the Blue Jays will construct their lineup. It will be interesting to see how they handle this situation going forward. At least for today, it will be the same lineup against righties as usual:

Coming up with a good "Find the Link" for Odorizzi was tough:

Prospects are always exciting to watch and with Odorizzi and Profar making their season debuts, this a good Monday night to watch baseball.