For some reason, I ended up researching and chatting about Danny Farquhar at 2:30 am this morning.

Happy Victoria Day, Canadians! On this holiday Monday we are treated to some afternoon baseball, with the Blue Jays hosting the Tampa Bay Rays down at the Rogers Centre starting at 1:07 pm with R.A. Dickey taking on Jake Odorizzi. Unfortunately, my source from back in January was unreliable--the Blue Jays will not be wearing a commemorative Queen Victoria cap today.

I must warn Blue Jays fans that Tom Dakers will be visiting Toronto this week, starting on Thursday. If you recall, the last time he was in town, the Blue Jays lost three starting pitchers in four games. So go and say hi to him at the Rogers Centre if you see him! As per tradition we will be holding a Bluebird Banter Meetup while he's in town this Saturday, May 25 at the Elephant & Castle on King right after the game.

Since last time: Since the last edition of MMMM, the Blue Jays haven't played much, going 2-2 in four games, and they also didn't make many moves: transfering Dustin McGowan first to Dunedin (May 14) then to Buffalo (May 17) for rehab, and then yesterday (May 19) they optioned Thad Weber to the Buffalo Bisons and transferred Sergio Santos from the 15- to the 60-day disabled list. The organization also released Clint Everts when John Stilson was promoted to AAA. Greatest fact about Thad Weber: his children are named Babe (daughter), and Gehrig (son).

Rainout in Bronx a break for struggling rotation - Toronto Star
Baseball is meant to be played every day, so it was weird to have the Blue Jays having played four games since last Monday. Nevertheless, they played .500 ball the last week, so that's improvement! The timing of the off days and the rainout could not have worked out better for this team that is suffering from injuries to starting pitching. This also means that Chad Jenkins has been bumped from the rotation this time around, and hopefully it means that the Blue Jays can take this chance to bring up an outfielder for the bench instead of carrying nine relievers.

Not Playing Yankees For A While Is Good - Jays Journal
Yea, you can't really just take away games versus the Yankees, but I get why it's tempting to say that the Jays are 16-18 against everyone else. An aside: who in the MLB scheduling department thought that it'd be a good idea for Toronto and New York to not face each other again until August?

Another letdown for ex-Marlins - Toronto Sun
Mark Buehrle on teammate Jose Reyes, who has rejoined the club on the DL:

"The other day here, we’re losing 5-0 and the ump called a checked-swing for a strike against us. Jose is yelling: ‘No, no, no,’ whistling at the ump. He’s still into it."

Jose Bautista's Golden Ticket - MLBFanCave.com
Blue Jays Fan Caver April Whitzman shares a picture of Jose Bautista's "golden ticket", a life time pass to every single baseball game for the rest of his natural life. I assume that means he can walk into a sold-out stadium with that and eject any fan he wants.

Tom did a recap of Sunday's minor league games here.

JJ to make rehab start at Class A on Monday - BlueJays.com
Josh Johnson is scheduled to start tonight at 6:30 pm Eastern in Dunedin for a rehab outing. He will be facing Chevy Chase, Maryland (yes, there is a town named that) native Matthew Bowman of the St. Lucie Mets. According to Dunedin broadcaster Tyler Murray, Johnson's pitch count will be around 40. As always, you can hear Tyler call the game for free here. Also: J.A. Happ is still feeling discomfort in his knee that he injured when falling from getting hit by the Desmond Jennings line drive, and can be expected to be out for three to six weeks.

Bisons offense grabs win - The Buffalo News
Amy Moritz recaps the Bisons' 11-6 win over Charlotte. Jim Negrych and Moises Sierra both had three hits as the club went 7-for-15 with runners in scoring position. Moritz didn't mention that Bisons starter Todd Redmond was ineffective in his debut, going 3.1 innings giving up five runs on six hits and two walks. Redmond had just come off the disabled list with a right shoulder impingement. It's kind of sad to see former Blue Jays prospect Zach Stewart struggle at AAA.

Humble Stroman shines in '13 debut - New Hampshire Fisher Cats
Ashley Marshall recapped Marcus Stroman's first professional start (all his appearances were in relief in 2012) in his return from a lengthy suspension. Stroman pitched very well, with a 92-95 mph fastball. Waiver claimant Clint Robinson, 28, continues his good season in AA (.297/.386/.441) with a 3-for-4 effort.

The most fun transaction of yesterday:

The most fun transaction of the day: "Richmond Flying Squirrels activated LHP Jack Snodgrass from the 7-day disabled list."

A Thing Worth Keeping An Eye On - U.S.S. Mariner
Dave Cameron wrote 1000 words on former Blue Jay Danny Farquhar, who was best known for his side-arm delivery and his name's resemblance to a certain evil character in Shrek. If you recall, he was claimed from the Jays by the A's last June before being claimed by the Yankees two weeks later, and then was involved in the Ichiro Suzuki trade just a month later. He shuttled between five minor league teams in 2012 without a sniff of the Show. He was finally recalled by the Mariners and had a great debut Sunday night, striking out five of the eight batters he faced. But some time in between his short stint in Toronto and last night, he completely rebuilt himself as a pitcher.

As noted by Cameron, Lord Farquhar has transitioned from a slider/sinker guy to someone who has a 95 mph fastball, a cutter in the low-90s, and a curveball that is slower by about 10 mph. He is also no longer a side-armer according to the release point charts from Brooks Baseball: 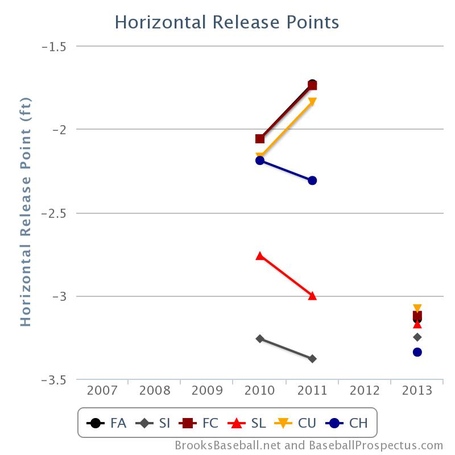 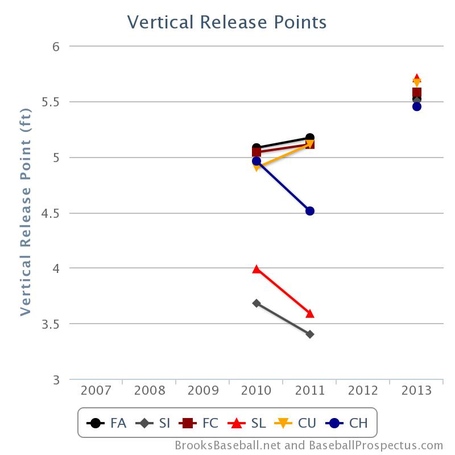 Video evidence also shows the dramatic change in delivery from this in 2011 (sorry to remind yall about this game), to this in 2013. It is always interesting when a pitcher completely abandons what got them to the majors and undergoes such a dramatic change--and be successful--at the top levels of professional baseball. I will heed Cameron's advice and keep an eye on Farquhar. I didn't plan on chatting about Farquhar in the wee hours this morning, but it happened.

Neil Munro looks at Canadian pitchers' performances against the Blue Jays and the Expos.

Fraction of starts by left-handed pitchers - High Heat Stats
There was a curious dip in the number of southpaw starters starting from the early 1990s to the early 2000s, what do you think it could've been caused by? (Note: as noted in the post's comments, there is an error in the graph, the percentages are all doubled since the author divided by the number of games played instead of the number of starts)

Robert Coello is throwing an ancient new pitch - Baseball Nation
Rob Neyer writes about former Blue Jay Roberto Coello's (co-WAY-yo) forkball which looks like a knuckleball. Coello pitched in six innings for the Jays last year (12.79 ERA, 2.211 WHIP, but 15.6 K/9!) after he was called up after Tom injured Drew Hutchison.

Twins, Brewers go Reverse Jersey for 1948 Throwbacks - SportsLogos.Net
Chris "Non-Dairy" Creamer writes about the Minnesota Twins and Milwaukee Brewers' Turn Back The Clock uniforms for their game on May 30 at Target Field. The twist is that the Twins will be wearing the St. Paul Saints' grey road uniforms at home, and the Brewers will be wearing the AAA Milwaukee Brewers' home threads on the road. I look forward to one day seeing the Blue Jays wearing the old Toronto Maple Leafs unis on the Rogers Centre field.

Ax to fall soon for LA's Mattingly - FOX Sports
After getting swept in Atlanta, Dodgers manager Don Mattingly's seat is getting even hotter. Will he be fired soon? Ken Rosenthal thinks so (just a feeling, he didn't report any leaks from the front office).

Sports The Good: The Path Less Traveled - Fanatico
Over at Fanatico, Dustin Parkes writes about Keila Penner, who demonstrated true devotion towards her favourite team and defiance against authority figures. May the Senators win for Keila.