Who Are Ya: Alex Cobb

Share All sharing options for: Who Are Ya: Alex Cobb

Ramon Ortiz faces right hander Alex Cobb tonight as the Blue Jays look to continue their winning ways. Cobb was picked in the fourth round of the 2006 draft by the (Devil) Rays and is having a pretty great season in his third year in the big leagues. In his eight starts (53.0 IP) he has a 2.89 ERA and a 3.58 FIP, showing impressive command with a K/9 of 8.83 and a BB/9 of 2.04. He's pitched this well in spite of the fact he has a 18.4% HR/FB rate so far, which is awfully unlucky. He also made some history earlier this season. 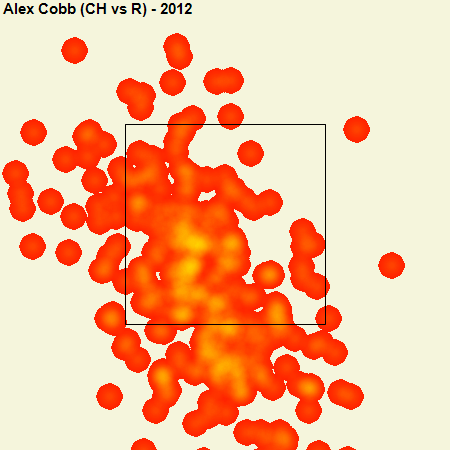 Here's a gif of the nasty split-change the Blue Jays hitters can expect to see tonight:

Both lefties and righties have around a .300wOBA against Cobb in his career although he's been much tougher against lefties this year than usual. A right handed pitcher with such a great changeup might be a situation to sit Lind, but Cobb's split-change is equally as good against hitters on both sides of the plate so it doesn't matter very much tonight. This actually might be a good situation to start Anthony Gose as well due to Colby Rasmus being so lost at the plate against great off-speed pitches.

Find the link between Alex Cobb and the 2010 winner of the Tony Conigliaro Award.