The Jays fell 4-3 to the Rays thanks to an untimely JPA GIDP and a bad call on the final strike of the game.

Well, that sucked. Before we get to the most painful suckage, let’s look back at the most important suckage.

It’s the eighth inning, and the Jays trail the Rays 4-1. This screen grab is courtesy of Fangraphs, showing the leverage index for each plate appearances, as well as the team’s win expectancy at the end of the plate appearance.

So, yeah. Basically, the jays began the comeback, thanks in part to an error from Ryan Roberts, and then J.P. Arencibia but a one-pitch end to it. If you like banking jokes, the Jays basically got the game to such an insanely leveraged point that they were the Lehman Brothers of baseball. And then J.P. Arencibia acted as the crash, pulling the rug out from under that leveraged percentage and bankrupting the team’s chances.

Perhaps this will put an end to the "Arencibia is clutch" arguments in support of a guy with a .245 OBP. I mean, one plate appearance shouldn’t swing anyone’s opinion on anything, really, but if you believed the "clutch" argument in the first place, you’ll probably abandon it with a bases loaded, eighth inning GIDP.

My real issue isn’t the outcome, though. Instead, I take issue with the process – Arencibia went first pitch swinging with Fernando Rodney on the mound. Rodney, accustomed to entering games at the start of a clean inning, as most closers are, was entering in an unfamiliar situation. More importantly, Rodney is throwing just 41.6% of his pitches in the zone this season. Even with a first pitch strike rate of 59% (which includes swings at balls out of the zone), there was a strong chance Arencibia could work a favorable count. Instead, he beats a low first pitch two-seamer into the ground.

What most will remember is the ending. Melky Cabrera fell behind 0-2 with two outs in the ninth, with the game now 4-3 thanks to Colby Smashmus (homer and a ground-rule double on the night) scoring on a wild pitch. With Munenori Kawasaki on first and Jose Bautista on deck, Cabrera had this plate appearance (a called strike, a foul, a called strike). 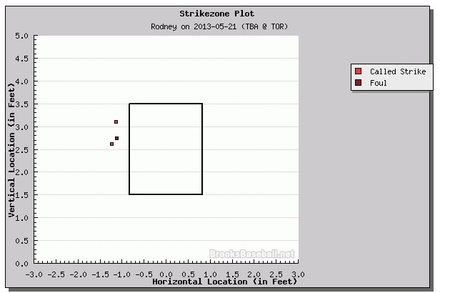 Now, those are two brutal calls. The Jays still only had a 10.2% chance of winning the game, but many will blame it on that call alone. We shouldn’t have been surprised, though, as this was home plate umpire Dale Scott’s strike zone to left-handers for the night. 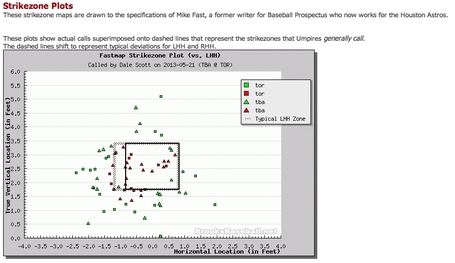 It’s a tough way to lose, but in reality the Jays had lost their best opportunity to come back an inning earlier.

Or, when they trotted out Ramon Ortiz to the mound. The noted junkballer’s smoke machine went dry and his mirrors broke, leaving him exposed against a Rays lineup licking their lips at Ortiz’s pitch-to-contact ways. 2.1 innings, six hits, one walk, just a single strikeout and a pair of taters. The Jays trailed 4-0 in the third and Ortiz got the early hook.

Ortiz was never expected to be a long-term option, I don’t think, but there were some who bought in to the 2.35 ERA through three appearances. HA. I don’t take pleasure in the failure of others, especially on the team I cheer for, but there are over 1400 innings of major league track record to suggest Ortiz is downright terrible. Tonight was affirmation.

It also left John Gibbons rolling the dice with extended bullpen outings, a situation he managed just fine. Aaron Loup got five outs to get the team to the fifth, when Esmil Rogers saved the day with three solid innings of work. This not only saved the bullpen from being overtaxed but kept the game close enough for Gibbons to manage the late innings like a game within reach.

Steve Delabar tossed the top of the eighth, a low-leverage situation but one that made sense for him – he hadn’t pitched for a few days and the Jays had a good part of the order due up. Brett Cecil then worked a tidy-ish ninth to keep things close and allow for one final shot at the come back.

When your starter gets just seven outs and you get away with just four relievers being used, you’ve done okay. Cecil and Delabar could conceivably pitch again tomorrow afternoon, meaning the team shouldn’t need to make a roster move for an extra arm, as you’d sometimes expect with an early chase. (They could, however, send Ortiz down for another bullpen arm, though they’d need to make another move for a starter on Sunday.)

Other stuff happened as well, like a eight-pitch Brett Lawrie at bat that ended with a strikeout even though not a single Rodney pitch was in the strikezone. Edwin Encarnacion had an early TOOTBLAN. Jose Bautista did a nice job beating the shift (with a hat tip to Yunel Escobar once), going 2-for-3 with a walk. The Jays also turned four double plays and had another pair (if I remember correctly) that were an Emilio Bonifacio hesitation away from coming to fruition.