J.P. Arencibia: The Good, The Bad and The Well Below League Average

Share All sharing options for: J.P. Arencibia: The Good, The Bad and The Well Below League Average

Social media hero J.P. Arencibia has picked up in 2013 where he left off 2012, not being very good for the Toronto Blue Jays. While people (like the hot air balloon of Gregg Zaun) like to talk about how Arencibia's power makes up for his numerous other shortcomings, it's become pretty clear that a winning team should probably have someone besides JPA behind home plate. Although some of what J.P. Arencibia brings to the table has been good, most of it has been bad and almost all of it has been well below league average.

Serious Pop- An undeniable fact about J.P. Arencibia is that he can hit a baseball very far. His 10 home runs this year is tied for eleventh in the major leagues. His .462 slugging percentage this year also slots him comfortable in the top 10 among starting catchers this season. J.P.'s ISO of .237 is obviously pretty impressive as well because when he gets a hit it usually goes for extra bases.

Solid Arm- J.P. Arencibia's other tool that is at least average is his arm. In 2012 his CS% was 29% while the league CS% was 25% so he was slightly above average, but nothing to write home about.

Arencibia throws out Victorino (via MLB) 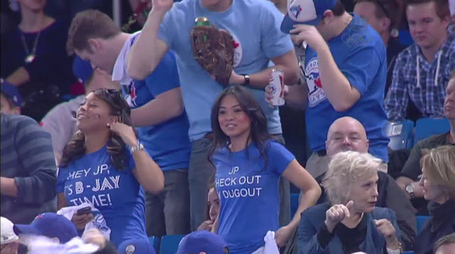 He Strikes Out A Lot, Like Way Too Much (Plus He Doesn't Walk)- When John Paul walks to the plate there's a 34% chance he strikes out. That's fifth worst in the whole league, with teammate Colby Rasmus being the worst at 40.1%. A third of the time Arencibia hits, there's zero opportunity for anything good to happen at the plate or on the base-paths. Dirk Hayhurst and Gregg Zaun had a discussion a while back about Arencibia and Hayhurst said a player who strikes out 200 times in a season doesn't deserve to start and I (for once) couldn't agree more with him. He also has only walked twice this year, which is a BB% of 1.3%! That's second worst in the league for players with more than 100 plate appearances.

There's no sign he's getting any better with his eye at the plate either. This year he's swinging at pitches outside the zone 39.4% of the time. That's up from 37.2% in 2012 and 33% in 2011 while also making less contact on pitches both inside and outside of the strike zone. This is a sign that his plate discipline is actually getting worse as he approaches his "prime years" and his strikeout rate should be expected to stay just as bad as it currently is.

He's Not Very Good At Defense- Although defensive prowess is tough to measure for catchers, it seems to be a consensus among people who watch the Blue Jays that Arencibia is a pretty horrible defensive catcher. According to Fangraphs, Arencibia's -2 Defensive Runs Saved is among the bottom 10 for catchers this season. To back this stat up, J.P. leads the league with 6 passed balls and is sixth with 15 wild pitches. Obviously catching R.A. Dickey at the beginning of the season didn't help his numbers, but he ranked just as poorly last season. He also seems to receive the ball awkwardly too often leading to a lot of calls that don't go his way. Awkwardness in gif form:

Obviously there's comfirmation bias going on here as it's easy to find gifs of all catchers making mistakes, but it seems to occur pretty frequently with J.P. behind the plate.

The Well Below League Average

It's become clear that J.P. Arencibia is below average at the catcher position in every category except hitting for power, and maybe his arm. If you're into graphs, here are some that show how consistently below average Arencibia is: 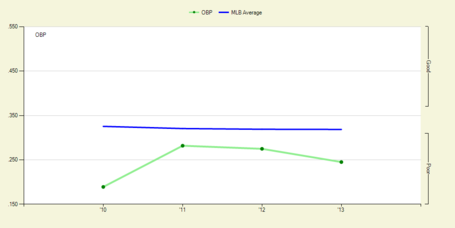 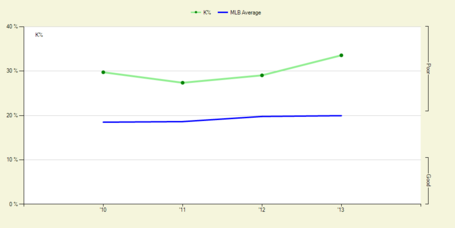 His wRC+ this season is 89 as it was for 2012 as well, meaning that in spite of all his flashy home runs, he's creating 11% less runs than the league average. That's 11th worst out of 14 qualified starting catchers so far this season resulting in Arencibia being worth only 0.3 WAR thus far this season. To be fair, as was noted in the game thread last night, a wRC+ of 89 is only slightly below the usual league average for catchers.

If I'm Alex Anthopoulos, I'm trying to do whatever I can to make sure J.P. Arencibia stops playing catcher for the Blue Jays as soon as possible. Unfortunately there isn't a very easy answer to this dilemma for the time being. Josh Thole in Buffalo is definitely an option where he's hitting .330/.411/.495, although those numbers should be taken with a grain of salt. He's also not much of a defensive upgrade and lacks the only thing Arencibia has, which is power. Starting the current backup catcher Henry Blanco is just as bad an option due to his lack of ability to even hit his weight. Getting a new catcher through trade is also an option, but the catcher position is not one of overflowing depth in the major leagues and finding a suitable replacement would prove a tough task for the Blue Jays brass.

The long term solution is likely A.J. Jimenez, who's strength on defense gives something for Blue Jays fans to look forward to. The past two seasons have been riddled with injuries for the young Puerto Rican so it will probably take until at least 2014 for Jimenez to start pushing his way through the upper levels of the Blue Jays catcher depth chart.

I hope everyone (even Gregg Zaun) can now agree that J.P. Arencibia should not be behind the plate with the Blue Jays going forward if they look to be a contending team. Although it's unfortunate for the fan favourite catcher, the sooner he is replaced the better for the Toronto Blue Jays slim playoff hopes.

Let us know in the poll and comments what you think should be done with J.P. Arencibia going forward.