Who Are Ya: Chris Tillman vs. Sean Nolin

Share All sharing options for: Who Are Ya: Chris Tillman vs. Sean Nolin

After the Orioles fans got to see one of their big pitching prospects debut last night in the form of Kevin Gausman, Blue Jays fans will have their chance tonight with Sean Nolin. He goes up against Chris Tillman who has continued having a pretty solid year since his start against the Blue Jays on April 22. Surprisingly, he pretty much dominated the Blue Jays lineup on that occasion (back when the Jays weren't good) getting a no decision in a walk off 2-1 win for the O's. Tillman went 6.2 innings allowing 4 hits, 3 walks, and 1 earned run recording 3 strikeouts on the evening. In that start he threw almost 75% fastballs in the low 90's, mixing in a few changeups and curveballs. 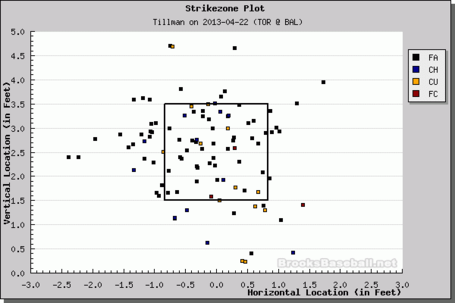 How does a guy with a low 90's fastball throwing it three quarters of the time only give up one run in almost seven innings you ask? When hitters like Edwin Encarnacion swing through pitches like this fastball for strike three. Don't worry, this will be a homerun tonight. 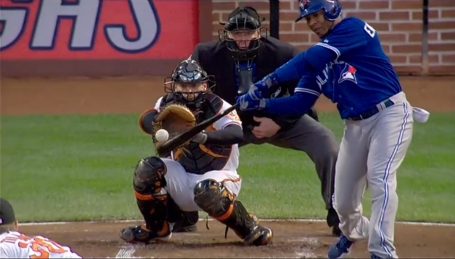 It's now time to pause and reflect on the fact that the last time Chris Tillman faced the Blue Jays was also the last time:

J.P. ARENCIBIA GOT A WALK

What are you thinking Tillman? Just throw it down the middle! 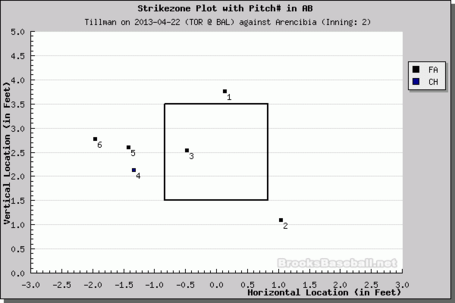 Since this is Sean Nolin's first ever MLB start, let's take a look at him as well. I made a longer post about him back in the offseason so you can read that if you like, although I'll be copying a lot of that stuff into this post. Nolin is a 23 year-old left handed pitcher who was drafted in the sixth round of the 2010 draft along with the old Lansing Three. He flew under the radar with the old depth of the Jays system, but with consistent results he slowly became one of the Blue Jays' top prospects.

Nolin features the four main pitches (fastball, slider, curveball, changeup), which all still have room to grow. He's not a power pitcher like Gausman was last night, but he still pitches smart with a 9.39 K/9 and 2.93 BB/9 in 15.1 innings down at New Hampshire this year. He's also allowed only two earned runs and no homers. His numbers were very similar last year so this is no small sample size magic.

Fellow Bluebird Banter member Jared Macdonald wrote up a great post over at JaysProspect.com with some first-hand observations of Nolin, so go and read that! Here's some select quotes if you didn't have time to read the whole thing.

At 6-foot-5 and 230 pounds, Nolin is an imposing figure on the mound with wide hips and long limbs. He throws almost over the top and on a good downhill plane, with good deception as a result of hiding the ball well.

“He’s probably a hell of a lot better pitcher than people give him credit for,” Knowles said. “He can spot the fastball pretty good, his changeup has been very effective.

“When he gets in trouble he just goes to the fastball and he’s been able to spot it. The fact that he’s left-handed he can sink it, he can ride it.”

In addition to facing tougher competition while with the Fisher Cats, Nolin was taught how to throw a power slider that has a slider grip, but is thrown like a fastball which gives it a cutting action.

Nolin's fastball sits in the low 90's and he says that's one of his out pitches. Here's him recording an out with the pitch.

Nolin's changeup is slowly coming along although he isn't using it much, mainly focusing on just a fastball-curveball combination. In Marc Hulet's article about Nolin he said the lefty wasn't throwing his curveball for strikes, which will be an issue in the major leagues.

I noted the similarities I saw between Nolin and Mark Buehrle in the offseason, and it's even more interesting to compare as we've now seen Buehrle in a Blue Jays uniform for two months.

Chris Tillman is pretty neutral with his splits, which isn't surprising considering how often he throws his fastball. Lind had a single, walk, and strikeout against Tillman in the April 22nd game. There's no reason to think that Lind won't be in the lineup tonight.

Here's my preferred lineup. I have Gose love if you couldn't tell. After J.P.'s big night last night, there's no way he gets dropped in the lineup, but I can dream.

I was going to make a "Will Arencibia Walk?" feature, but I realized that I'd never actually say yes so it would just be a daily struggle to find a new "no" gif.

Find the link between Chris Tillman and Sean Nolin!

Congrats to AApologist is in order as well, as he was only two days off in predicting this debut by Nolin all the way back in February. He clearly is just Alex Anthopoulos in disguise.

Enjoy the game tonight, it should be a fun one to watch!