Sean Nolin managed just four outs in his big league debut, and the Jays' bats left too many aboard to come back.

Well, I said before the game that I wasn’t confident in Sean Nolin succeeding in his first start above Double-A, and sadly, I was correct. I’m not taking pride in this, as I was cautiously optimistic I’d be wrong and Nolin’s K:BB ratio and plus curveball could carry over to the majors, but some pitches caught too much of the plate and the Orioles weren’t wont to let those go by unpunished.

And so it was that Nolin managed to get just four outs, surrendering six runs on seven hits and a walk without striking out a single batter. Perhaps most disappointing was that he managed just a single swing and miss in his 35 pitches, 22 of which went for strikes.

His release point was exceptionally consistent, which I guess bodes well for the future potential of his multiple-pitch repertoire, as he should keep batters guessing what’s coming (unless there’s another tip off). The issue was more that he had some "control" but not "command," a kind of Joe Blanton-itis where the strikes he threw caught too much of the plate 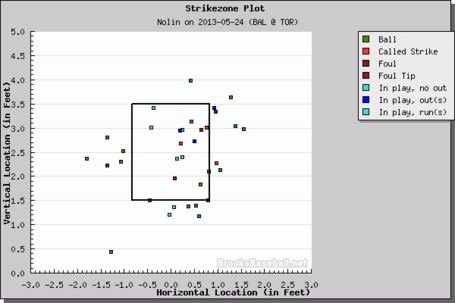 This is especially true in the final pitch of at bats, although it’s really tough to fault him for that J.J. Hardy home run, which he golfed out of the park. 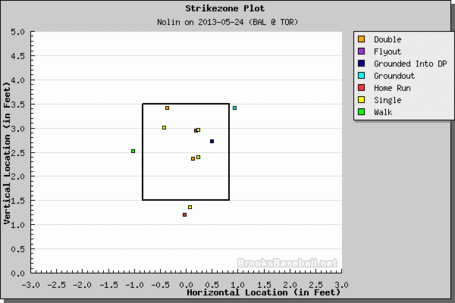 Nolin didn’t show much, but it’s not like Ramon Ortiz made a claim for that rotation spot in his relief stint, giving up three runs in two and two-thirds. He also gave up two tasty dingers, which is kind of his thing. Nolin might get another chance on Wednesday against the Atlanta Braves if Josh Johnson isn’t ready to go. Johnson, by the way, is starting at Triple-A Buffalo on Saturday, so the Jays would need to shuffle the rotation to fit Johnson back in when he’s next ready to go.

Furthering the relief effort were low-leverage specialists Brad Lincoln and Esmil Rogers, who combined to throw five decent innings giving up just a run. Rogers, in fact, has now thrown 7.1 straight shutout innings, work that’s come against the Giants, Yankees, Rays and Orioles. He has a 5:1 K:BB in that time, too. He could be turning a corner against some decent bats, but it could be influenced by the low leverage he’s been allowed to work under.

Oh, and then there’s the Brett Lawrie thing.

Lawrie was tossed in the third inning for tossing his gear aside and somewhat in the direction of the umpire. It seemed, and still seems, a ridiculous overreacting from Dan Bellino. Yes, Lawrie has a reputation and had argued earlier calls, but replays show he said nothing and just tossed his gear. There was no need for him to be kicked out, let alone to toss John Gibbons for arguing in his player’s stead. There are arguments for kicking him out, I guess, but you'd have trouble convincing me this was justified.

This probably wouldn’t have made a four-run difference, especially with Lawrie’s current sub-Mendoza hitting (though he did hit a homer in the second). The Jays’ line-up hit well, smacking 17 hits off of Chris Tillman and company, but couldn’t string enough together to come back.

The Jays stranded nine runners, lost one on the basepaths (when Emilio Bonifacio was caught stealing to end what had, to that point, been a solid rally) and hit into a pair of double plays. It’s good to see the bats swinging, though, and everyone but J.P. Arencibia managed to reach base at least once.

And boy, Jose Bautista is in the zone. There has been a lot of talk of late as to whether "being in the zone" exists for hitters, but Bautista is certainly doing his best to prove that it does. He had three more hits tonight, making him 9-for-15 in his last four games with two bombs and four walks mixed in there. Yeah, he’s hot.

Adam Lind also chipped in three hits, including his fourth homer of the year. Lind looks like a different hitter so far this year, and while I’m still withholding judgment on whether the new patient approach is for real, but it’s nice to see right now.

There are some other notes I could make, too, but this post-game is late because our fearless leaders at BBB are drunk from the game, and it’s an early start tomorrow.

R.A. Dickey and Freddy Garcia take the hill opposite each other, so the bats for the good guys should stay hot.