Anatomy of a Disappointment

Not to be confused with A Disappointing Anatomy, my autobiography.

Share All sharing options for: Anatomy of a Disappointment

It’s putting it mildly to say that the Toronto Blue Jays have been a disappointment so far this season. The Jays sit at just 21-29, well off the 95-win pace some were hoping for or downright expecting.

In fact, 20 of 43 ESPN experts had the Jays pegged to win the American League East, while just shy of half the writers at Fangraphs thought the same. I had them penciled in for the first Wild Card spot and a low-90s win total, a prediction that still seems too optimistic given how the first 50 games have gone.

Of course, the season isn’t over. Teams have rallied from bad starts before, though a 9.5 game hole in the division is pretty intimidating. Fangraphs now has the Jays pegged for just 76 wins total, while Sports Club Stats gives Toronto just a 0.2 percent chance of making the playoffs.

It’s bleak, and it’s not difficult to pin down where the Jays have lost the "wins" they were expected to have – injuries, poor performance, and a possible overrating of the team to begin with, given the buzz-iness of the team in the preseason.

But statistically speaking, where have the Jays lost their edge? I pulled the pre-season ZiPS projections to compare to the current performance of the team to find out where these extra games are being lost.

This is a bit of a fool’s exercise, so please take it with a grain of salt as a fun activity rather than anything prescriptive. I’m taking some liberties by just taking full-season predictions and turning them into 50-game predictions while also ignoring the fact that all teams, no matter how they’re constructed, are going to have to deal with injuries (although ZiPS prices some of this risk into their projections). Another key "issue" with this "method" (which again, is "just for fun," commenters) is that you can’t just tally Wins Above Replacement to get a team win total, though it can approximate it for us.

The Jays were expected to hit, but not have any really elite players. That’s somewhat surprising given the roster composition. Instead of superstar performances from Jose Bautista and Edwin Encarnacion, ZiPS instead expected an All Star season from Bautista and plus seasons from Brett Lawrie and Jose Reyes. The bigger value was in having seven players who were league average or better with no regular being of replacement quality.

Jose Reyes got hurt. This can’t be understated in it’s impact, because when healthy Reyes is really, really good. ZiPS only expected him to miss 26 games all season, so this is a shot to the bottom line that can’t be replaced. Brett Lawrie has also been downright terrible at the dish, and while ZiPS only expected him to be a bit above average with great fielding, his bat has been so bad that he’s basically been a replacement level player. Melky Cabrera has also far underperformed his projection, though his bat is at least starting to heat up. The biggest problem, though, is that nobody other than Jose Bautista is really outperforming their projection. You expect some guys to over-perform and some to under-perform, but the Jays have been all negative except for Bautista. 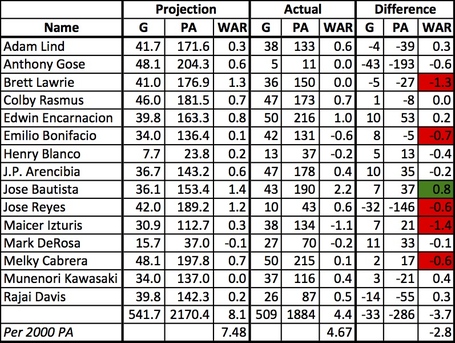 I should point out that ZiPS over-estimates plate appearances (I believe it’s with the aim of providing a projection for every player if they got to play), so, for example, Anthony Gose gets a big negative that’s beyond his control. For the purposes of the team, I added the bottom row for WAR Per 2000 Plate Appearances, showing that the Jays have lost nearly three wins from their hitters (and technically, their fielders and baserunners, since WAR attempts to capture those elements as well) compared to their projection.

ZiPS was not as high on the Jays’ pitchers as some, pricing in injury time for every single starter. The system also didn’t think any of them would be an All Star, though at their worst they figured each person in the "original rotation" (looking at you, Ricky Romero) was expected to be close enough to league average. There aren’t many teams that can boats five league-average starters, so this was kind of a positive expectation.

So, things have gone poorly. You know who has been really good? Casey Janssen. Brett Cecil, too. You know what’s a really bad sign for a team? When two relievers have been your best pitchers, by WAR, through a third of the season. Yes, no Jays starter is even on pace to be a league-average arm in terms of WAR, and they’ve given significant innings to pitchers who are below the theoretical replacement level, or as it might soon be known, The Chad Jenkins Threshold. 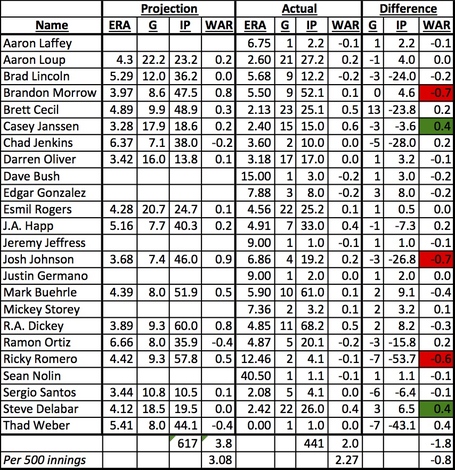 Again, ZiPS overshoots the playing time by a large degree. But if we round to 500 innings, the Jays have lost nearly a full win from the pitching staff as well, primarily because nobody has really over-performed their expectation in the rotation. While the bullpen guys have been a nice surprise, they just don’t pitch enough to have a huge impact. Conversely, the under-performance of Brandon Morrow, Josh Johnson and Ricky Romero have, together, accounted for two wins already.

So if the Jays are only 3.6 WAR below their projection, does this mean that they only should have been expected to be 25-25 right now, rather than 21-29 or 29-21? Not necessarily. Again, you can’t just add WAR up to get a win total.

Actually, according to this quick graphic comparing WAR-Expected Wins (hitter WAR + pitcher WAR + replacement component), the Jays have done better than their WAR would predict by about a win. 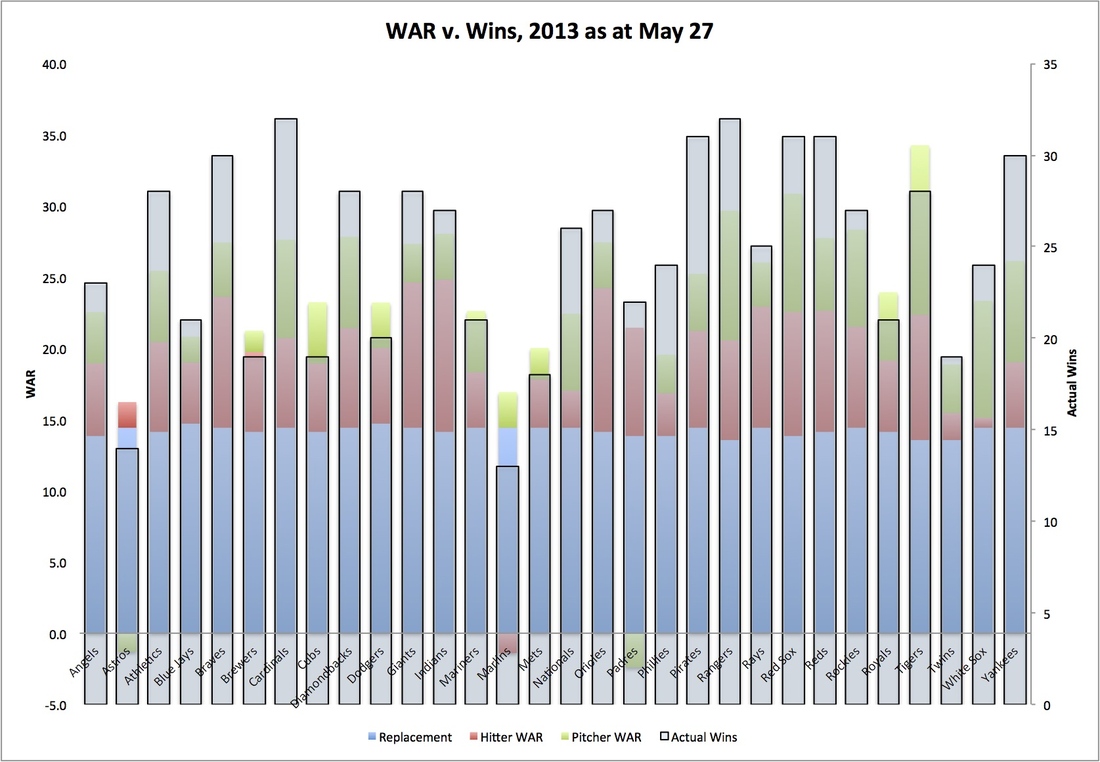 Luckily, if you believe in the projection systems, there is upside to be had the rest of the way, since streaks and slumps are to be expected. There is the school of thought that every cold streak has a resultant hot streak, a Newtonian or dualistic perspective. While this isn’t statistically sound, it sure is a way to maintain optimism.

Unfortunately, there’s also the Bayesian approach, whereby the last two months shouldn’t make us more confident in the next four, it should see us readjust our initial expectations in the light of this new evidence.

Then again, all of this was just a quick and dirty look at the Jays through 50 games. We all know the issues and problems that have plagued the Jays so far, and there’s nothing wrong with holding out hope for an Angels-like winning streak to change the complexion of the summer months.