Who Are Ya: Kris Medlen

Share All sharing options for: Who Are Ya: Kris Medlen

Kris Medlen faces Esmil Rogers tonight in Atlanta. The 27 year old right handed Braves starter had a breakout year last season with a 1.57 ERA. This year he's taken a slight step back, but is still pitching quite well. In 62.2 innings (10 starts) Medlen has a 3.16 ERA and a 4.52 FIP with a pretty high walk rate of 3.30 BB/9.

Medlen throws a fastball, sinker, curveball, and changeup. He throws his sinker almost half the time leading to a 53.4% GB rate last year. As with Maholm yesterday, Medlen has one of the best changeups in the league with a 43% whiff/swing rate so far this season. You can see where he locates the tough pitch against lefties here:

Medlen has a tendency to throw his sinker around the centre of the plate against right handed batters leading to groundballs if he locates effectively, but a lot of hits if he doesn't. Hopefully the Blue Jays right handers can take the sinkers and hit them the other way in the game tonight instead of trying to pull the tough pitch on the outside edge. 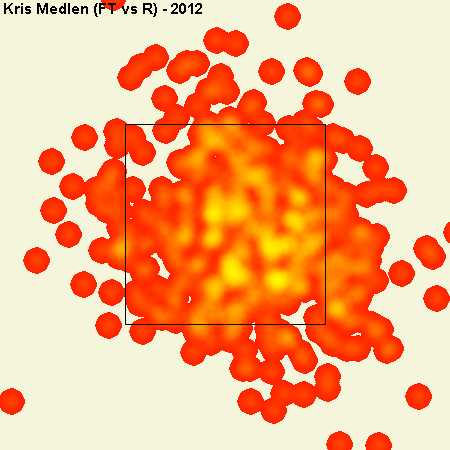 Should Lind Play: Hmm I guess not

Kris Medlen has been slightly tougher against lefties (.281 wOBA) than righties (.298 wOBA) over the course of his career. With the game being played in an NL park, the Blue Jays are kind of in a sticky situation with Lind and Encarnacion both needing to see time at first base, as Gibbons said Encarnacion would not be put back at third base.

So here's my ugly lineup for tonight's game:

Who's Hot and Who's Not (Fun with SSS)

In the past five games Evan Gattis has hit 3 homeruns and has an OBP of .471 so Esmil Rogers should avoiding giving Gattis anything that he can hit hard.

On the flip side, B.J. Upton is scuffling badly hitting .156 in May striking out almost half of his at-bats. He hasn't played since Sunday, but it wouldn't be too surprising to see him in the lineup trying to get his hitting going again facing Esmil Rogers.

Find the link between Kris Medlen and the Rays' star third baseman.

Enjoy the game tonight, it's going to be interesting.