There's been quite the little kerfuffle the past couple days around here about how the Jays have used Casey Janssen this season, and indirectly how John Gibbons has managed the bullpen. To quickly recap, in Tuesday's 7-6 loss in 10 innings to the Braves, Thad Weber gave up the game winning home run leading off the 10th, Janssen was not used in a non-save yet critical high leverage situation. After the game, the team said he was not available due to a recurring shoulder maladies that have plagued him all season. Then the next night on Wednesday, with a 3-0 lead over the Braves, he was used in a save situation, albeit in a relatively low leverage situation.

Casey Janssen is quite clearly the Jays' best reliever, and is consequently is their closer. And closers tend to be used largely in save situations. Unfortunately, using a team's best pitcher primarily or exclusively in save situations is not very effective management because a number of non-save situations are more critical than several save situations. A great example is the above two games. The Tuesday game was a non-save situation, but the leverage index entering the 10th was 2.35, meaning the situation was 2.35 as important as the average inning. On the other hand, Wednesday's save situation with a three run lead had a leverage index starting the inning of only 0.84 (16% below average), because teams win over 95% of games when they have a run lead and 3 outs to get starting an inning clean. All else equal, you want your best pitcher used in the Tuesday scenario, rather than saved for a Wednesday scenario.

Of course, rarely in life is all else equal. If Janssen was not available Tuesday on account of physical issues related to the shoulder, then that's that. But my contention is that the over-riding factor in when Janssen has been used has not been the state of his shoulder, but whether there is a save situation. Which would make Gibbons guilty of managing to the save, which is a sub-optimal use of resources. Given Janssen's shoulder issues, for any given game, we cannot infer much, but with two months of data, we can look at patterns in usage to try and figure out what's going on. So this is my contribution to furthering this debate, looking comprehensively at the data to see whether there's legitimately a case of an injury dictating usage or non-usage, or Gibby managing to the save.

At the outset, I want to note that normally, this would be quite difficult, because there's a lot of points where an ace reliever could be used and the first thing we have to do is define situations where the ace reliever should be used. If a team has a two run lead going to the 8th, the closer is being saved for the 9th and another reliever gets into a jam in the 8th, many would argue that the closer should be used at that point to give the best chance of preserving the lead, lest the lead get blown before he gets a chance. But Janssen's injury actually makes this easy, since the Jays have said they want to give him plenty of time to warm-up and generally start innings fresh. Thus it easier to delineate two types of situations: the Foreseeable Save Situation; and the Foreseeable Non-save Critical Situation. By looking at how many of each situation there has been this year, and Janssen's usage in each, we should get an idea of what's happening. If his shoulder is dictating when he's used, his usage in each should be in proportionately the same. If it's a manager managing to the save, than dissimilar patters of usage should result.

First, we need to define is situations in which it is reasonably likely that a save situation will occur, even if the situation fails to materialize. I define a FSS as occurring when one of the following conditions is met:

Now, we need to define those non-save, high leverage situations when great relievers like Janssen should be used. I define a FNCS as occurring when one of the following conditions is met:

A) At home, if the Jays are tied after the top of the 8th. If they fail to score in the bottom of the inning, there will be no save situation, and a tie game in the 9th is a critical situation. If they score, there will be a save situation unless more than 3 runs are scored, so there's a very high likelihood of needing him either way

B) On the road, if the Jays are tied after the 8th. This is largely the road analogue to A, except that a save situation is possible on road after the 8th so a manager might be inclined to save the closer. Of course, this the precise definition of managing to the save, and what we don't want. An inning featuring walkoff potential is literally the highest leverage situation possible.

A couple notes on FSS and FNCS:

1. They are not mutually exclusive in the same game. On the road, a FNCS occurs in the bottom of any inning from the 9th onwards if tied. A FSS occurs if the Jays take the lead in extra innings.

3. If the Jays have a lead that qualifies as a save situation, and then in their last half inning extend the lead so that it's not a save situation, it still counts as a FSS. We want to evaluate the decision at the time, not as things turn out.

4. There are other situations that could theoretically qualify as non-save critical save situations. Down one run late is a pretty critical situation. However, I want to define FCNS quite narrowly and assume that Janssen would only be used in the 9th inning or later to avoid turning this into an exercise of how I would manage the bullpen, and keep it an exercise about whether Gibby is managing to the save.

How Has Janssen Been Used?

Below is a chart of the 20 games in which a FSS or FNCS has occurred, along with whether Janssen was used in the situation, as well as the number of days since he last pitched and the leverage index of the game (gmLI, from Fangraphs) when the situation occurred: 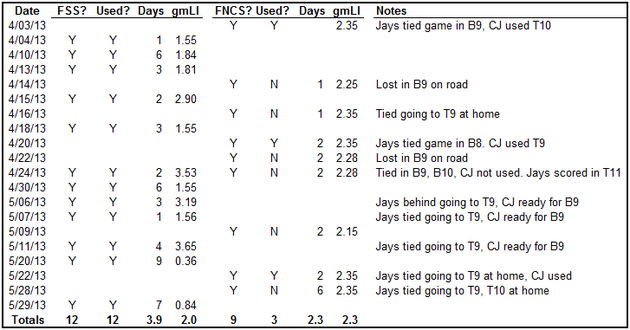 In the 20 games, there have have 12 foreseeable save situations and 9 foreseeable non-save critical situations, for a total of 21. On April 24, the Orioles tied the game in the bottom of the 7th. Janssen was not used in the bottom or the 9th or 10th, in innings with walkoff potential, but after the Jays pushed the go ahead run across in the the 11th, he came in for the save.

Let's start with the good news. Janssen has 16 appearances this season, and 15 have been in one of these situations. The only other appearance was May 3rd against Seattle, and that was after not having pitched for three days and with 7 relievers having pitched 9.1 innings before him on May 2-3. So he's not getting used in garbage time.

In the 12 foreseeable save situations that have occurred, Janssen has pitched every single time, recording 11 saves. The only time he didn't get a save was May 20th, when the Jays took a 5-3 lead to the bottom of the 8th and pushed two more across to negate the save situation. Janssen was already ready to go, so it made sense to send him anyway. So despite the shoulder issues, he's been ready to go each and every time without fail when there was a high likelihood of the save possibility.

However, in the 9 non-save, high leverage situations, he's only pitched thrice - April 3rd (first appearance of the year and second game, presumably he was quite fresh), April 20th, and May 22nd. In the April 20th game, the Jays tied the game with 3 in the bottom of the 8th, I don't know if he was going to come in anyway but he came in the 9th. One thing to note is that all of these games occurred at home. Of the other 6 FNCS, four were on the road and two at home.

Overall, in the 20 games that had a FSS or FNCS, Janssen was used 15 times, or 75% of the time. But the usage is not anything close proportional between FSS (100%) and FNCS (33%). What is the chance that something like this could occur randomly? If the true availability of Janssen is 75% (25% of the time he's unavailable due to shoulder issues), then using our friend the binomial distribution, there's about a 3.2% chance that we would have been available 12 out of 12 times in the save situations. Likewise, there's about a 1% chance that Janssen would have been available for 3 times in those 9 outings. What are the odds that those 3.2% odds and 1% odds would occur simultaneously due to randomness...well, we're talking serious, serious outliers. It's far more more to be non-random.

Now, there is one thing to address. On average, the save situations occurred about 4 days after this last appearance, whereas those non-save situations were on average much sooner, with 7 of the 9 coming the day after or 2 days after another appearance. Maybe that and wanting to keep him fresh explains his usage patterns, rather than mismanagement.

Looking at the data, there's been 4 save situations 1 or 2 days after the last appearance. Janssen has pitched in all of them. He's only pitched in 3 of the 7 (43%) non-save situations that fit that timeframe. Overall, that means he's pitched (been available) in 7 of 10 (70%) of games with a FSS or FNCS 1 or 2 days after his last appearance. Once again, the odds that this would occur randomly is statistically insignificant.

The final nail in the coffin, for me at least, is the aforementioned April 24th game against Baltimore. Twice, there were non-save, high-leverage innings to be pitched. Janssen was not used. But we know he was available: because once they took the lead he came out to pitch. Now I suppose it's possible that he was borderline available, and Gibby didn't want to use him, but once it once to extras the situation compelled him to. It's possible, and I can't preclude it, just as I can't preclude that in any given game Janssen is unavilable. I don't know. But when you look at the whole picture, a very clear pattern emerges:

Gibby is managing to the save. And it's hurting the Jays.

One final point. The 9 non-save situations have leverage values between 2.15 and 2.35, meaning all of them were in situations at least twice as important as the average inning. In his 12 save situations, Janssen has only pitched in 4 games in which the leverage exceeded 2. Put another way, in situations where the leverage was over 2 and he could start an inning fresh with ample time to warm up, he's been used 7 of 13 times (54%). Obviously it's not possible to get to 100%, but it should be substantially higher than that.