Who Are Ya: Mike Minor

Share All sharing options for: Who Are Ya: Mike Minor

R.A. Dickey takes on 25-year-old left hander Mike Minor tonight as the Blue Jays try to take three of four from the Braves in their home and home series. Minor has pitched 65.2 innings this year with a 2.47 ERA and a 3.27 FIP. The difference likely coming from a .237 BABIP and 84.3% strand rate. Minor has had great control this year walking 1.92 per 9 innings, while striking out 8.36. He also has a ridiculously low groundball rate of 33.3%, continuing the trend of Minor being a consistent flyball pitcher.

Minor throws the main four pitches (four-seam, changeup, slider, curveball) heavily relying on the fastball, throwing it almost 60% of the time this year. The changeup is thrown almost exclusively against right handers on the outside half and is a pretty effective pitch for Minor. 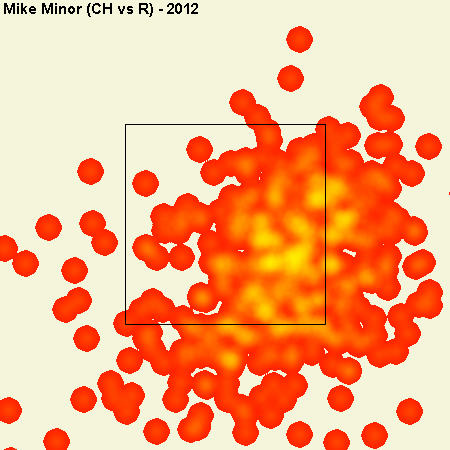 He also has the ability to look righties look pretty bad with his curveball:

With Encarnacion and Lind already splitting time in the NL parks, there's no way Lind starts against a lefty. Minor has always been tougher against lefties and this year he's actually allowed a minuscule .179 wOBA against them. Lind will likely pinch hit again if the situation arises late in the game.

R.A. Dickey had a .176 batting average and .198 OBP when he was in the National League with the New York Mets.

Find the link between Mike Minor and the defending American League Cy Young.