Who Are Ya: Hisashi Iwakuma

Share All sharing options for: Who Are Ya: Hisashi Iwakuma

To be perfectly honest, I'm writing this preview before Friday night's game because I know if King Felix dominates the Blue Jays, there is close to a zero percent chance I'll want to stay up and write one on Iwakuma. I'm writing this in the frame of mind that the Blue Jays got dominated last night so if that didn't happen this is going to sound unnecessarily negative (EDIT: It totally happened eh. So this tone is perfectly justified. Sigh). After signing as an international free agent from Japan prior to the 2012 season, Hisashi Iwakuma ended with a 3.16 ERA last year logging 125.1 innings. This season, the right hander has started six games, going 37.2 innings and surrendering seven earned runs (that's a 1.67 ERA). WHY ARE THERE SO MANY GOOD PITCHERS IN THE MLB AND WHY ARE NONE OF THEM ON THE BLUE JAYS.

Hisashi Iwakuma throws a fastball, sinker (shuuto), curveball, slider, and splitter. The splitter is the key for Iwakuma and it's a groundball machine. Visions of Blue Jays hitters rolling over his diving splitter are flashing through my mind and I don't know what to do about it. Since this preview has been ridiculously depressing so far, here's some kind of positive news. Iwakuma has been quite lucky this year with a .178 BABIP and a 90% strand rate! That's got to regress eventually and it could be this afternoon, but more likely will be in his next start after leaving Toronto.

This is where Iwakuma put his splitter last year against lefties. Oh boy: 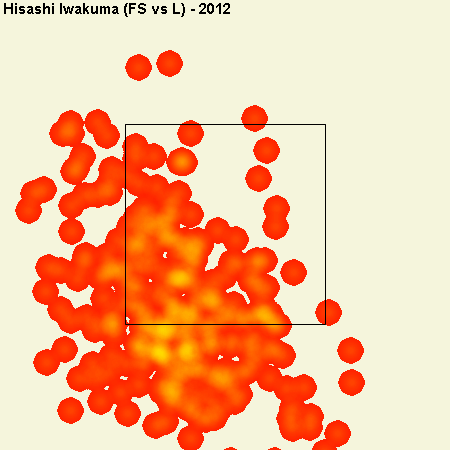 He paints the opposite side of the zone against right handed batters with his slider although it's not that great of a pitch. 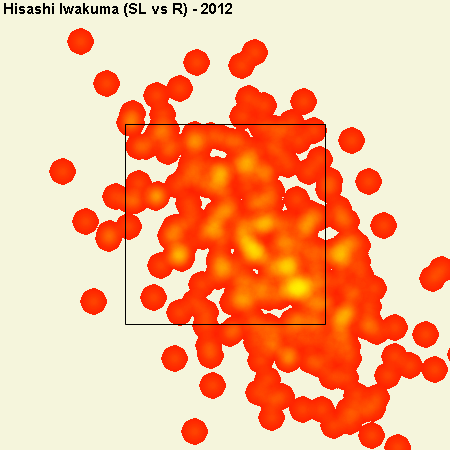 Iwakuma's splits only cover a year and six starts so they have to be taken with a grain of salt. He has a .286wOBA against left handed batters and .298wOBA against righties. Couple those numbers, with the wickedness of Iwakuma's splitters and you end up with a lot of Colby and Adam strikeouts. Today is probably a good day to sit Lind (and maybe Rasmus) and get Rajai Davis into the lineup.

Find the link between Hisashi Iwakuma and the pitcher who's started two games where his team won 5-3 against the Blue Jays already this year.

Enjoy the game and pray for good Dickie!