Who Are Ya: Joe Saunders

Share All sharing options for: Who Are Ya: Joe Saunders

Ughh this season is something else. Today's winning pitcher is left hander Joe Saunders and he goes up against Brandon Morrow who is facing his former team. Saunders has pitched 36 innings this year and allowed 21 earned runs. He hasn't been very good this season likely because he's not missing any bats. He's only striking out 9.1% of batters and walking 8.4% of them. Nothing about him really stands out and he's pretty much just a regular Joe.

Joe Saunders throws a four-seam fastball, sinker, curveball, slider, and changeup. He has to rely on his off-speed stuff to get outs because his fastballs aren't that great coming in at high 80's on the radar gun. He's like a Ricky Romero with worse stuff, but who can repeat his delivery.

His changeup is pretty strong against right handed batters getting a lot of groundballs off the pitch and he's had a high usage of it when's he ahead in the count according to Brooks Baseball, so the more you know. A CHART: 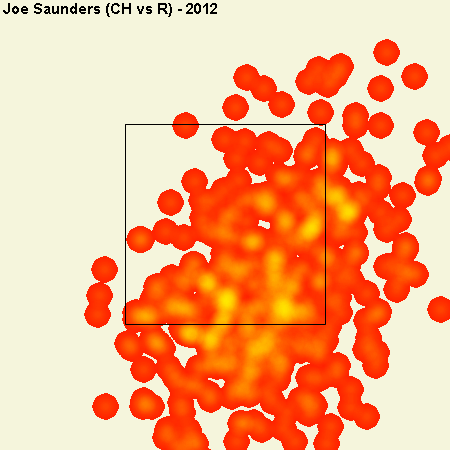 Blue Jays hitters just need to make contact today and hope for some homers or try to string some rallies together (HA). Saunders relies on his sinker when he's behind in the count so it will be important to get into hitter's counts and zone in on the relatively mediocre hard stuff from Saunders.

Should Lind Play: It's Not Going To Happen

John Gibbons and company aren't going to let Lind face a lefty, although at this point I wouldn't be THAT surprised if they threw platoon match-ups out the window. Over the course of his career, Saunders has been A LOT better against lefties holding them to a .277wOBA while righties touch him up for a .351wOBA. Woah, he's like a LOOGY starting pitcher. Colby Rasmus should really get a day off too going by these splits, especially conidering Saunders has been even tougher on left handed batters this year in a small sample size.

The Dallas Cowboy Jumbotron stretches goes from one 20-yard line to the other making it one of the biggest HDTV's in the world. It's almost 12,000 square feet.

FInd the link between Joe Saunders and the yellow skateboarder who wears blue shorts and a red shirt.

Enjoy the game! I've missed every game this series and that will continue today, not sure whether I should be happy or sad. I know I said Saunders will win this game in the introduction, but if the Blue Jays can't win this one today then they should reevaluate their career choices.