Share All sharing options for: Blue Jays come back to beat Rays 8-7 after Mark Buehrle gives up seven runs

Imagine if Monday night's game was a microcosm of the Toronto Blue Jays' 2013 season. They dug themselves into a big hole then slowly crawled their way back up. There were a couple of hiccups and lots of doubt along the way, but they did it. Yes, it would be very unlikely, but close your eyes and just allow yourself to imagine for a couple seconds. It could happen.

Monday already started badly, with reports from Jon Morosi, then Shi Davidi, saying that Josh Johnson was going to be out until the end of the month. Then the Blue Jays were going into Tropicana Field, where they have gone winless in their last eight games. Things weren't looking good for Blue Jays fans.

And they didn't start out well. Mark Buehrle was awfully horrific, even with Henry Blanco catching him instead of J.P. Arencibia. The Rays' half of the third inning looked like this: single, walk, single (run), single, grand slam (4 runs), double, strike out, homer (2 runs), ground out, strike out. So for those not tallying that was six hits and seven runs in that inning--but hey, he struck out two while only walking one. A partial positive we could take from Buehrle's start is that he logged three more clean (more or less) innings after his blow up to give the Blue Jays their chance to start a rally. Beside that, there was nothing much good to say about him.

That Evan Longoria grand slam and Luke Scott two-run shot were probably enough for most Jays fans to change the channel to the Maple Leafs game, but thankfully, their game got out of hand in time for what happened next.

But the Blue Jays answered back right away in the next half inning against Rays starter Jeremy Hellickson. Adam Lind started things off with a single, then Colby Rasmus homers to dead centre field to put the Jays on the board 7-2. Hellickson got a couple outs but started to get shaky, walking Munenori Kawasaki then Brett Lawrie to bring up Melky Cabrera, who singled right up the middle on Hellickson's 35th pitch of the inning, scoring Kawasaki, 7-3. Hellickson seemed to right the ship in the fifth, getting the Blue Jays for their only 1-2-3 inning of the evening.

Rays manager Joe Maddon brought in fireballer Jake McGee in relief, but more importantly he made a defensive change, calling on Yunel Escobar to man short in place of Sean Rodriguez.

Maicer Izturis started the inning, waiting for a couple of 96 mph pitches go by, before singling on a 92 mph four-seamer. Mark DeRosa, batting for Kawasaki, slammed a 98 mph fastball for a pinch-hit two-run opposite-field homer that most certainly made his manager look smart. The score was 7-5. Even after scoring five, the Jays still only had a 16% win expectancy.

But Toronto kept on clawing back as their bullpen kept shutting down the Rays. The Jays had a great scoring chance in the seventh, with Jose Bautista and Edwin Encarnacion reaching second and third with nobody out. Unfortunately, Bautista had a bout of bad baserunning, trying to advance home on an Adam Lind line drive. They tried again next inning. Arencibia singled off the glove of an outstretched Yunel Escobar and Lawrie walked to cause Maddon to bring in Fernando Rodney to face Melky Cabrera. Rodney induced a tailor-made double play ball, but it popped right out of the glove of shortstop Escobar for an error, loading the bases for Bautista. All Bautista needed to do was to hit it in the air and hit it far, and that's exactly what he did, sac flying to right fielder Sam Fuld to bring the Jays to within one, 7-6. Encarnacion then hit a ball deep at third but Longoria snagged it and threw ball on four hops (or so) over to first for the out and to end the inning.

Rodney came back out for the ninth, but was awfully shaky. He walked Adam Lind on four pitches, but home plate umpire Mike Everett had a different definition of a "strike zone" than I, so Rodney had to throw a couple more pitches to put Lind on. In this past calendar month, Adam Lind has walked 13 times in 51 plate appearances, good for a 25% BB rate, which is slightly above his career rate of 7.1%. Lind is a walker, so he was replaced by pinch runner Emilio Bonifacio, who quickly stole second then ended up at third thanks to a caught stealing attempt. The error was placed on catcher Jose Molina for a bad throw, but Escobar should have been able to catch it. With Bonifacio a tantalizing 90 feet away, Rasmus struck out in a pretty bad at bat, then Izturis hit a scorcher, but right at first baseman James Loney to bring the Jays to their last out.

And who would be walking up to the plate? J.P. Arencibia, the man who was not happy to find himself off the starting lineup just a few hours earlier. The Rays closer worked him to the last strike of the game, then the rest, as they say, was history:

I was so insanely jacked after J.P. Arencibia's go-ahead two-run homer that I am now legitimately worried about my health should the Jays ever play meaningful games in late September.

The Blue Jays came back after only having a 1.7% win expectancy after Luke Scott's home run. They were down 7-0 and rallied back against the Rays.

Looking back at franchise records, the biggest deficit the Jays have overcome was 10 runs on June 4, 1989 (of course, there was a slightly more important world event happening that day), the season in which the club started 12-24 only to win the East. In the sixth inning of that game in Fenway Park, Ellis Burks hit a sac fly to score Mike Greenwell to make it 10-0, and the Red Sox's win probability reached 99.9%. I wish FanGraphs would display a couple more decimal places there. Yet the Blue Jays managed to come back and take the game into extra innings when they also won on a two-run homer, that time by Junior Felix.

The Blue Jays have come back from two seven-run deficits before, once on April 27, 2003 against the Royals, and the latest on June 5, 2007 against the then-Devil Rays. In that 2007 game, the Blue Jays, at home, were down to a 0.5% win expectancy when Josh Towers allowed a Brendan Harris single in the bottom of the ninth with the score at 11-6 D-Rays. The Blue Jays had a huge rally in the bataround bottom of the ninth, with the game ending with Matt Stairs scoring on Aaron Hill's walk-off walk off of (say that five times fast) Tampa Bay reliever Tim Corcoran. Adam Lind is the only player from either team who played in both seven-run rallies.

It might not have been the biggest deficit the Jays have dug out of in history, but seeing this happen in Tropicana Field (a.k.a. the House of Horrors) after all the hell the team has gone through to start 2013, it felt huge.

Jays of the Day! J.P. Arencibia (+.765!!! WPA), Casey Janssen (+.167 WPA), Melky Cabrera (+.136 WPA). I will also give honourary JoD awards to Colby Rasmus and Mark DeRosa for homering in what was low-leverage situations. Honourary JoDs also go to the Jays fans who were down there cheering on the team and bringing the attendance up to 9,952.

When the Blue Jays were in the midst of their unlikely comeback, I made a vow to Twitter:

If the Jays win this game I'll go vegetarian tomorrow. No. Vegan.

Then, of course, this happened (via FanGraphs): 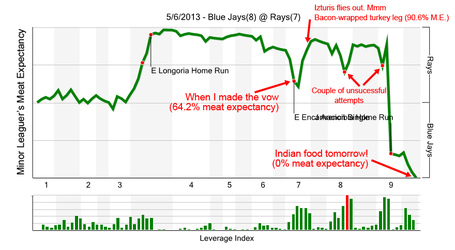 I will be tweeting out my vegan meals tomorrow for all those interested. And you're welcome for the win.