UPDATED: J.A. Happ is hospitalized after being hit in the head with a Desmond Jennings line drive

UPDATED: Blue Jays pitcher J.A. Happ was hospitalized Tuesday night after being hit in the head with a line drive. He arrived at the hospital in "fair condition" but was upgraded to "good" this morning, and may be released from the hospital later today.

Share All sharing options for: UPDATED: J.A. Happ is hospitalized after being hit in the head with a Desmond Jennings line drive

Happ has just left Bayfront Medical Centre in St Petes. Had a bandage on his head and was on crutches. Right knee appears injured. #bluejays

Gets hit in the head and injures his knee?

The mood in St. Petersburg's Tropicana Field grew somber in the bottom of the second inning in the Blue Jays - Rays match when Toronto starter J.A. Happ collapsed after being hit in the head by a line drive off the bat of Desmond Jennings. Happ, with his head and neck immobilized, was removed from the field on a stretcher under applause from the crowd and players from both teams. Trainers and medical staff from both the Jays and Rays worked on Happ.

According to Ira Kaufman of the Tampa Tribune, Happ was taken to the Bayfront Medial Center, a hospital two blocks away from the stadium and Shi Davidi reported that he was conscious on the way to the hospital.

Looking at video replay (warning: video may be disturbing for some viewers) of the incident, it appears that Happ saw the baseball come back at him right after finishing his delivery, and had lifted his right (glove) arm to block the ball but was not quick enough. He was headed on the left side on his head, reportedly above his left ear. He immediately collapsed on the mound, holding his head with both hands. A screenshot showed a small amount of blood on Happ's left hand, presumably from where he was holding his head, as Happ turned to look at it. His left eye was covered with a piece of gauze as he was laid on the stretcher.

As Happ was wheeled out of the field, the camera on his face showed that he was blinking in his right eye and he was able to lift his right hand to acknowledge the support from those applauding. 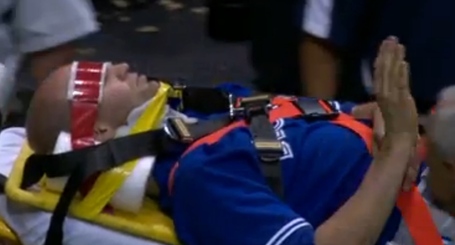 Any hits to the head is dangerous and scary, but it is especially disturbing when a five-ounce sphere that was launched at 91 mph is returned after being hit by a bat. This incident followed another high-profile case when Brandon McCarthy was struck in the head as a member of the Oakland Athletics last season. Over the offseason, Major League Baseball officials had been exploring different ways to offer projectile protection to pitchers, who stand less than 60 feet from the plate after delivering their pitch. Padded caps are under development from various companies, but MLB has not approved them because they were not proven to be sufficiently effective against balls of line drive speeds.

It is unlikely that we will be seeing anything that would match that criteria, as the new batting helmets tested this spring were only rated up to 100 mph and the were already bulkier and heavier than the existing models. Pitchers would require more flexibility and less weight than the "Great Gazoo" helmets, and would probably need more than 100 mph protection as batted balls can travel faster than that.

The only thing we can do now is to sit, wait, and hope for good news to come out of St. Petersburg. Bluebird Banter would like to send their best wishes to J.A. and the entire Happ family.

J.A. Happ is continuing to go through tests at the hospital, according to the Blue Jays' PR department, and they will continue to update. (via Mike Wilner)

Barry Davis tweeted that the ball struck Happ's ear resulting in a cut behind the ear. That is likely where the blood was from. Brett Lawrie added that Happ was conscious and speaking while he was lying on the field.

John Lott heard from R.A. Dickey that Happ is alert and has gone for a CT scan. Dickey then said, "It is really scary. I just started praying on the spot. That’s all I knew to do."

Via Captain Latte (@captainlatte): the Major League Baseball family came out to wish Happ all their best.

J.A. Happ released a statement via the Tampa Bay Times:

"I'm in good spirits. I definitely appreciate the support of the baseball community. It's been overwhelming, the messages and kind words I've been getting. I just want to thank everyone for that. And I look forward to getting back out there soon.''

The Blue Jays' official Twitter account released an update, saying that Happ suffered a head contusion (bruising) and a laceration (cut) to his left ear, but is responsive and doing well. The club anticipates that he will be released from hospital later today after final testing.

Shi Davidi added that Happ was admitted in "fair conditions" last night, but the hospital upgraded him to "good" this morning at 6 am.

This is great news to hear, especially with how scary it looked yesterday. I'm sure medical professionals will keep their eye on Happ in the next few days or weeks to make sure he isn't suffering from any lingering effects.