Who Are Ya: David Price

Share All sharing options for: Who Are Ya: David Price

The Blue Jays attempt to win a four-game series tonight in Tampa Bay as the team's respective aces match up against each other in the form of R.A. Dickey and lefty David Price. Price has had a tough year so far this season allowing 31 earned runs over the course of 44.2 innings pitched. Coming off a Cy-young award last year, Rays' fans probably expected a little more than what Price has given them so far. The poor start isn't helping his selling price either as the Rays likely will look to trade Price before the trade deadline this year. This is also an interesting piece on some smart moves by both David Price and the Rays when agreeing to his 2013 contract.

As was pointed out in the links post today, David Price has been extremely unlucky this year, although a decrease in velocity is also to blame (among other things). If you don't feel like clicking on the link, Price's BABIP is .351 and his strand rate is 64.5% while his HR/FB is 20.5% which all lead to the conclusion that Price has been on the opposite side of good fortune. Couple that with this decrease in fastball velocity and you end up with a pretty rough start. 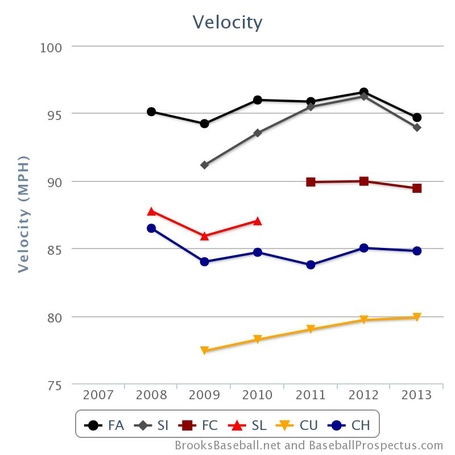 As you can see above, Price throws a four-seamer, sinker, cutter, changeup, and curveball. Against left handed batters, Price mainly throws a sinker-curveball combination while he attacks right handers with all five pitches fairly evenly. His cutter is one of his most lethal pitches, but it's been much less effective this year, although some of the increase in hits off of it could come down to his spiked BABIP. When Price is successful with his cutter he locates the pitch on the outer half against right handed batters. 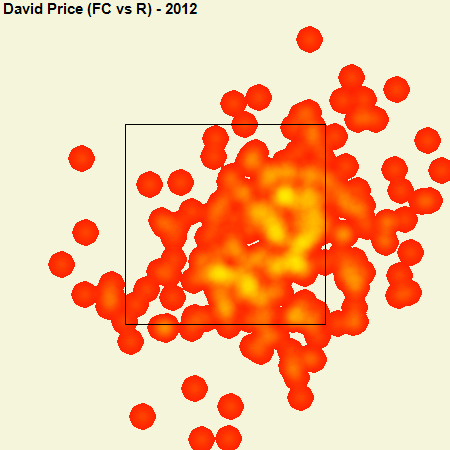 Should Lind Play: HAHA NO

First off, Lind has faced David Price the eighth most times out of any hitter in his career. Why the Blue Jays kept sending Lind out there against the tough lefty is beyond me. In 39 plate appearances, Lind has seven hits and two walks, which gives him a .256 OBP against Price. In the larger sample size variety, Price has a .250wOBA against him by lefties and a .305wOBA against him by righties. Even further, most of Price's struggles this year have been due to right handers dominating him, so the Blue Jays would be smart to stack the line-up with hitters of the right handed variety.

Congrats to getupkid yesterday, who delved deep into Creed history to "Find the Link". You're a true hero. For today's edition:

FInd the link between David Price and the Pittsburgh Pirates' starting third baseman.

The Blue Jays have already beat Sale this year, so hopefully they can make the step up and beat the full Price. Enjoy!