Who Are Ya: Jose Quintana (Take Two)

Share All sharing options for: Who Are Ya: Jose Quintana (Take Two)

Jose Quintana faces the Blue Jays tonight going up against Chien-Ming Wang. Quintana first faced the Blue Jays this season on April 17th (when we still had hope) pitching lights out. He went 6.2 innings giving up 5 hits and no runs on the back of 7 strikeouts. He picked up the decision in the game with Chicago winning 7-0.

Quintana mainly used fastballs and curveballs during his start also mixing in his cutter/slider. He made up for his lack of overwhelming stuff by locating well and pitching smart like in this Melky Cabrera swinging strikeout: 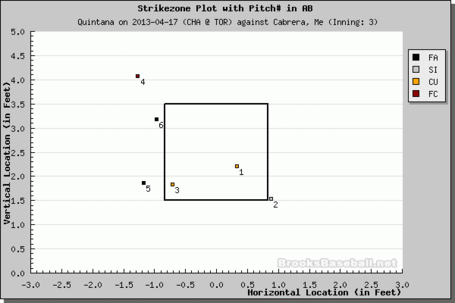 If you'll remember, this is the game where Colby Rasmus struck out all four plate appearances! Rasmus was lost at the plate against the lefty going down swinging to pitches like this: 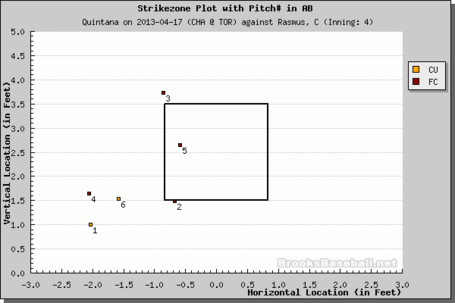 Quintana is still much tougher on lefties than righties and I really hope the Blue Jays aren't going to start playing Lind against left handed pitchers just because he's hitting so well. Colby Rasmus should also be on the bench tonight with Rajai Davis getting the start against Quintana. It's clear that the only way to beat Jose Quintana is with a right handed heavy lineup. He gets way too many whiffs against same handed batters.

Chien-Ming Wang will be making the start tonight for the Blue Jays attempting to put in a good enough performance to not be released after the game. Wang is a heavy sinkerball pitcher, throwing the pitch more than two-thirds of the time. His slider and curve are his next two most heavily used pitches. His success really depends on how often he is able to induce groundballs with his sinker because he doesn't record many strikeouts. He throws the sinker to the pitching-arm side against both lefites and righites as you can see: 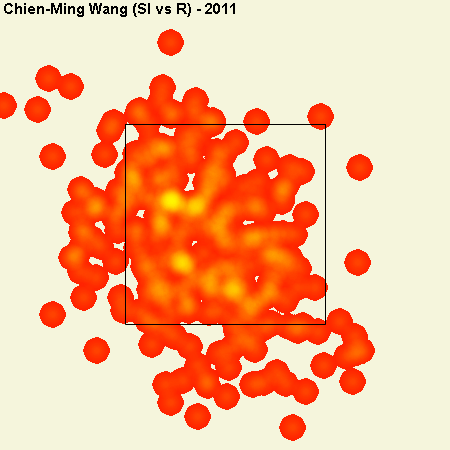 Find the link between Jose Quintana and Ted Bundy.