Chien-Ming Wang was bad but not terrible, holding down the fort long enough for the Jays to rally on a Jose Bautista home run and win it in the 10th.

Share All sharing options for: Blue Jays 7, White Sox 5: Wang Does Just Enough for Weird Baseball to Win the Day

It’s about time some #weirdbaseball started going the way of the Toronto Blue Jays. What was weird in this one? Among other things: *some lights went out for a period of time, causing a delay.

*Every "process" mistake John Gibbons made was rewarded with a positive "result."

*The world’s most lopsided collision went to the underdog, a Jay.

*Three errors, a passed ball and a wild pitch.

*The Jays didn’t have the most irritating announce crew (maybe…okay, maybe not).

Anyway, the Blue Jays snuck out a win that neither team really deserved, I guess. But let’s this the main points and prepare for the rubber match tomorrow night.

Wang was as expected, and by that I mean mediocre. His biggest asset will be his ability to gobble up some innings by pitching to contact and getting through some frames quickly. Wang did surrender five runs over his seven-and-a-third, and a 6.14 ERA isn’t going to cut it often. But in this one, the Jays just needed someone to hold down the fort while the bats came around.

He threw almost entirely sinkers, 70 of them in Brooks Baseball’s initial data pull but probably actually 79, since the action on his sinkers and "splitters" were nearly identical. Maybe they are a different pitch, since Fangraphs shows him as having a splitter in previous years, but it sure moved like a "slow sinker," coming in at 10MPH slower and moving a bit less horizontally. Someone will tell me I’m wrong, but I couldn’t pick them apart beyond the velocity.

He threw 51 of those splitters/sinkers for strikes, and while he didn’t work down in the zone as much as you’d hope, he did get 13 ground ball outs. Not that a plot like this will tell you much. 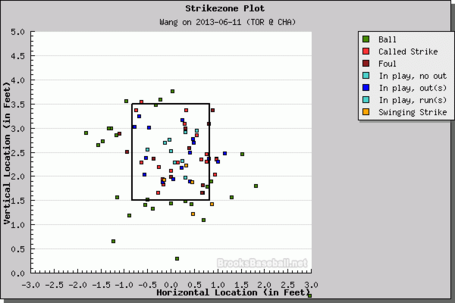 Perhaps this, just the final pitches of at bats, illustrates my point better, as Wang got very little action on pitches low in the zone to end plate appearances. 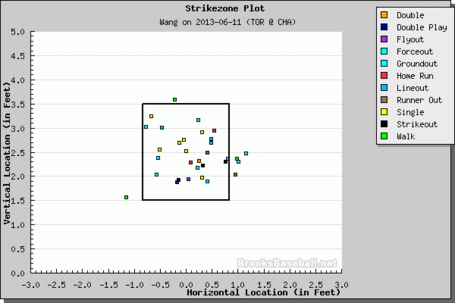 Regardless of how he got them there, Wang was not-bad-enough to put the game out of reach, which is all you can really ask from the 12th starting pitcher you’ve used this year.

He should probably also avoid the belt-high 91MPH sinkers that don’t sink on the inside part of the plate. The White Sox seemed to appreciate those.

Jose Bautista played the hero with a game-tying home run in the ninth inning, one that jumped off the bat and seemed destined to pull foul down the left field line but floated enough to stay fair. That tied things at five and had a .349 Win Probability Added, basically saving the Jays from the brink.

Brett Cecil, meanwhile, got five straight outs in impressive fashion to bridge things to extra innings. The guy is good.

This all set the stage for a weird tenth inning. Rajai Davis, who had remained in the game despite Colby Rasmus pinch hitting in the ninth (a few batters too late given basic game management logic, but I digress) and being available in center, singled. He then "stole" second in the same way you steal a Christmas present from your parents from under the tree…it wasn’t stealing, it was gifted. He was dead in the water but Alexei Ramirez dropped the ball, literally.

Lind then hit a long fly out to right to push Davis to third, allowing him to score on a wild pitch. I can’t believe J.P. Arencibia didn’t swing at said wild pitch, given he already had three strikeouts on the night despite seeing very few pitches in the zone.

But things got weirder than a managing mistake turned okay, a caught stealing turned stolen base and a wild pitch. --You see, Maicer Izturis got on with a single and then Munenori Kawasaki hit a ball further than he has in his life down the left field line. Izturis was waved home and was out by approximately 89 feet, but somehow jarred the ball loose from Tyler Flowers to score. For the record:

So yeah, things were weird in this one. That gave the Jays a 7-5 lead they would not relinquish, as Casey Janssen worked around some trouble to secure the save.

Other Notes: Adam Lind went 3-for-5 and got a hit off his arch nemesis Matt Thornton. I have no explanations for his surge against lefties. It’s not sustainable, as he’s only been even league-average against lefties once in his career, but I’ll definitely take it while the Jays wait to get to full strength. Hose Bautista gunned Gordon Beckham at third on what was equal parts and excellent throw and a hilarious slide. Edwin hit his 18th home run and now has an eight-game hitting streak where he’s 10-for-34 with seven walks and three home runs.