Who Are Ya: Chris Sale (Take Two)

Share All sharing options for: Who Are Ya: Chris Sale (Take Two)

Rubber match time tonight as the words "Rogers" and "Sale" go together for the first time in the history of the world. Esmil takes on Chris in a match-up that definitely seems one-sided at first (and second) glance. Chris Sale faced the Blue Jays for the first time this season on April 18th going seven innings, allowing four hits and three runs (two earned) with six strikeouts and a walk. To show how stupid pitcher decisions are, he picked up the loss in the game with Chicago losing 3-1 on the evening.

In the last game Sale was very even in his pitch selection throwing basically 25% of each of his pitches: fastball, sinker, slider, changeup. He hit 97 mph on the gun with his fastball so he definitely had his A+ stuff during the game. Sale has continued his torrid pace this season constantly going 7 innings, rarely allowing more than one or two runs. Unfortunately for him, Chicago is terrible on offense and Sale rarely picks up the all important decision.

During his start, Sale only faced one left hander in the form of Munenori Kawasaki which we should be thankful for because the tough lefty is dominant against same handed batters. Melky Cabrera had a tough evening against Sale going 0-3 against him swinging away to pitches like this: 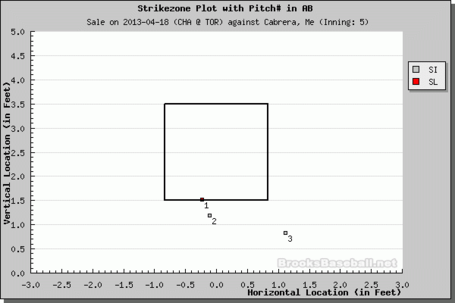 As you can imagine, J.P. Arencibia was lost against Sale striking out twice to pretty simple pitches like these heaters up in the zone. 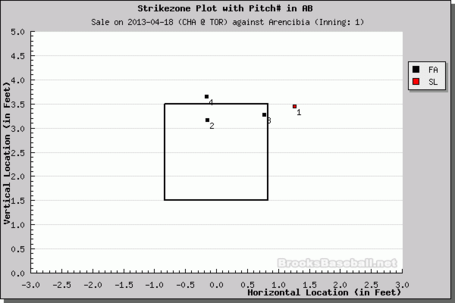 Should Lind Play: NO, STAHP, NO!

I'm slightly torn about when Adam Lind should face lefties because he's hitting the lights out right now against pitchers from both sides, more-so than any time I can remember in the past 5 years. As a huge fan of Lind, I hope that when he comes back to earth it's not too severe. That being said, against such a tough lefty in Sale you have to think this is where Gibbons will draw the line and sit Lind. Colby Rasmus should also sit again tonight with Rajai Davis starting in centre. Never mind, there isn't enough players on the team to pull this off.

My hopeful lineup for tonight would probably be:

Find the link between Chris Sale and the third catcher the Blue Jays drafted this year.

This would be a huge win tonight, but I'm not holding my breath. Enjoy!