Who Are Yu (Darvish)

Share All sharing options for: Who Are Yu (Darvish)

Yu Darvish faces up against Esmil Rogers tonight after last night's cancellation. Darvish's last start came against the Blue Jays five days ago. Darvish went 7 innings (as he has 8/13 times this season) allowing 3 runs (2 earned) on 6 hits, striking out 7 and walking 3. Darvish picked up the no-decision as the Rangers went down 4-3 to the Blue Jays in the 18 inning marathon.

During the start Darvish used all of his extensive repertoire of pitches:

If you were wondering, Darvish's two-seamer has so much arm-side run that it's considered a shuuto which is a popular pitch for Japanese pitchers that is basically a reverse slider.

Darvish showed why he has a 12 K/9 rate this season hitting corner after corner for his strikeouts. Bautista, Encarnacion, and of course Arencibia fell prey to his tough slider. 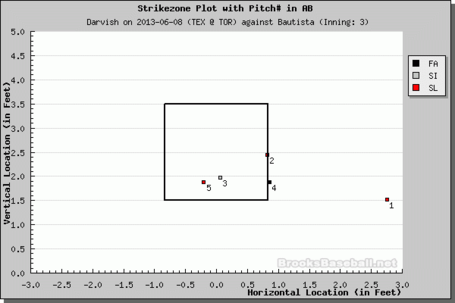 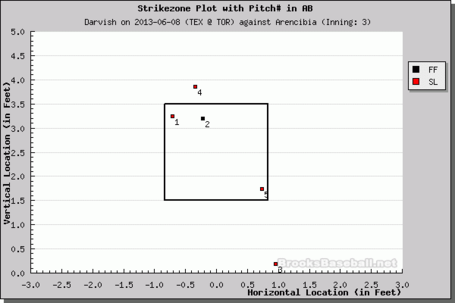 All of the Blue Jays runs against Darvish came on Colby Rasmus' error-aided inside the park homerun (scored a triple). The hit came on a curveball that caught too much of the plate and ended up at the wall in the right field gap. 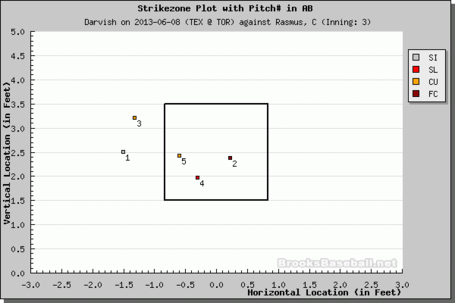 The key for the Blue Jays will be to capitalize on Darvish's mistakes because he's going to get his fair share of strikeouts every time he pitches. Also, Darvish has been much less successful (relatively speaking) at home than on the road so far this season so there's a bit of hope.

Adam Lind had three singles last Saturday against Yu Darvish and will definitely get the start today. Colby Rasmus also had the triple against the tough right hander and will play instead of Rajai Davis, who was the eventual hero of that 18-inning game.

Josh Thole playing instead of J.P. Arencibia is mainly wishful thinking, but against a tough righty it makes a lot of sense to start Thole instead of whiff master J.P.

If Arencibia does play, my prediction for him against Darvish is: 3 AB, 1 K, 1 FO, 1 GIDP.
For today's "Find the Link":
Find the link between Yu Darvish and the 2006 Blue Jays starting catcher.
We should be glad the game last night was cancelled, because Sale and Darvish back to back would be unfair.