Adam Lind: Partying (and laying off pitches) like it's 2009

Going into this season, not many people expected Adam Lind to be one of the best players on the team. As you can see from this post at the end of last season, the consensus was that Lind would be a bench player this year and then have his $7 million option bought out (for $2 million) and he would become a distant memory of Blue Jays fans. Instead, the 2004 3rd round pick has gone wild this year in a platoon role that has loosened up recently as he begins to face left-handers more often. His slash line right now sits at .344/.418/.540 (before the game on June 13). That average is fourth best in the whole league for players with more than 150 plate appearances. Even the most biased of Blue Jays fans would not have predicted this dominance at the beginning of the season.

It's easy to point to Lind's huge BABIP of .391 and say that what Lind is doing is not sustainable and that's true, partially. He looks to be making more solid contact this year and that's backed up by his higher than usual 21.6% line drive rate which helps a player's BABIP. He's also stopped hitting so many ground balls (41% this year compared to 48.3% last year), which combined with Lind's speed would definitely do some damage to his BABIP. Another possibility for Lind's torrid pace could be a simple hot streak that he's been prone to over the course of his career. In September of last year he was a near .300 hitter, and in June of 2011 he had a month that resembles his start so far this season. In a piece at Fangraphs touching on a lot of the similar points I'm looking at, Lind chalked up his improved stats to being in a good groove saying,

I’ve always been really streaky and I’m in one of those streaks right now.

Eno Sarris, the writer of the post at Fangraphs didn't seem convinced by that explanation and neither should we. Another quote that Lind made seems closer to what could be the key to his fantastic year this far. When asked the reason for his recent hot streak, he answered:

Experience, maturing as a hitter, not being so stubborn, and letting it happen instead of trying to force the issue,"

I'm not so sure the first three of those things are true because Adam Lind turned 29 halfway through last season and was struggling to hit his weight, making it hard to imagine one off-season maturing him up to a point where he could increase his batting average by one hundred points. The last option is slightly more intriguing as it's pretty easy to look at the numbers and see if Lind has adopted a new approach at the plate.

Since Lind's breakout season in 2009, he had gotten increasingly impatient at the plate and it cost him in the form of increased strikeout numbers. That is, until 2013. As you can see in the table below, in 2009, Lind swung at 28.2% of pitches outside the strike zone, which is below average, meaning he was a disciplined hitter who rarely chased. That resulted in his highest BB% and lowest K% in a full major league season thus far. After that season, Lind began to chase at more than a third of pitches outside of the zone, obviously increasing his K rate and almost eliminating all his walks.

Even further, when Lind swung at pitches outside the strike zone in 2009, he chose wisely making contact 75.5% of the time (well above average). During that great season, when he chased pitches, he made sure he could hit them. As I'm sure many of you reading watched Lind from 2010-2012 I don't need to tell you that he began to flail at un-hittable pitches either going down swinging or making weak contact.

In 2009, Adam Lind had a clear approach of getting a pitch on the inner-half and making solid contact or hitting pitches on the outer half to the opposite field. In the years following, his plate discipline slowly deteriorated with more outside pitches being swung at. Comparing the two charts of his swing rate, you can see how Lind had a slightly more balanced approach in 2009 than 2012:

As you can imagine, judging by the title of this post, Adam Lind has returned to his 2009 form and the results are fantastic.

In his platoon role, Lind has almost completely stopped chasing pitches and has zoned in on the strike zone rarely offering at pitches outside of it. Further, Lind is being more selective on pitches in the strike zone as well, swinging at close to only half of pitches in the zone. This has resulted in Lind taking pitches more often than any other time in his career only swinging 37.6% of the time overall. The difference in his swing rate can be seen in visual form as well (that blue outside the zone should bring a smile to your face):

This refined approach has brought back the Adam Lind we know and love, hitting pitches to the opposite field when he's pitched away and driving the ball to right field when pitched inside. 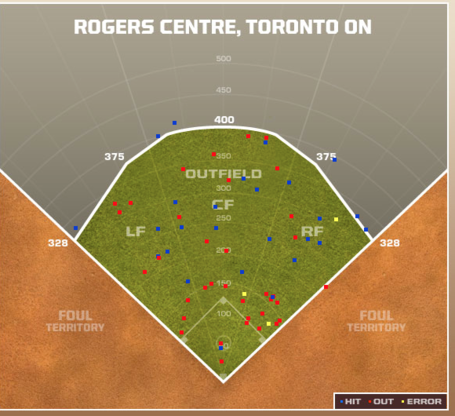 One last visual representation of the new Adam Lind comes to us by way of Mark Simon at ESPN who was kind enough to send this comparison of Lind's batting average hot zones from 2012 and 2013. While a lot of the differences in the heat maps come down to Lind's new approach (especially outside of the zone), some of it must also be attributed to his unusually high BABIP so far this season.

First things first, Adam Lind will definitely not finish this season with a .344 batting average. While saying that, it's very likely that this "new Adam Lind" is somewhat sustainable. His BABIP will regress at least a little bit, but if his line drive rate stays where it is, the drop should not be too significant. The key will be if Lind can continue to be disciplined at the plate and avoid chasing pitches that he cannot hit. It appears John Gibbons is going to start experimenting with Lind against lefties and a big test will be seeing if Lind continiues to only swing 40% of the time or if he begins falling victim to the tough off-speed pitches from same-handed pitchers that have tormented him for the past few years.

It will be interesting to see how Adam Lind fares the rest of season and while it won't be as fun to watch as pennant race, it will have to do! If he continues to "let it happen", there's no reason to think that he can't be a .300+ hitter against right handers (how he fares against lefties is anybody's guess), which should be enough to get his $7 million option for 2014 picked up by the Blue Jays. I'm not sure anyone would have predicted that before this season began. How things change.