Who Are Ya: Jeff Francis

Share All sharing options for: Who Are Ya: Jeff Francis

Esmil Rogers takes on Canadian left hander Jeff Francis tonight as the Blue Jays go for their seventh straight win. In 10 starts this year Francis has a 5.87 ERA, 4,71 FIP, and a 3.79 xFIP with a near 20% HR/FB rate in Colorado really damaging his numbers. His career-high K/9 of 8.02 is counteracted by his 3.33 BB/9 this season.

Francis throws a four-seam, sinker, cutter, changeup, and a slow curve that comes in around the high 60's. His hard stuff is only sitting mid to high 80's so he has had to pitch smart this year. His curveball has been getting close to 50% whiffs per swing this season so the Blue Jays will have to look out for the loopy breaking pitch.

Against right handers, Francis runs his sinker off the plate against righties trying to induce weak contact: 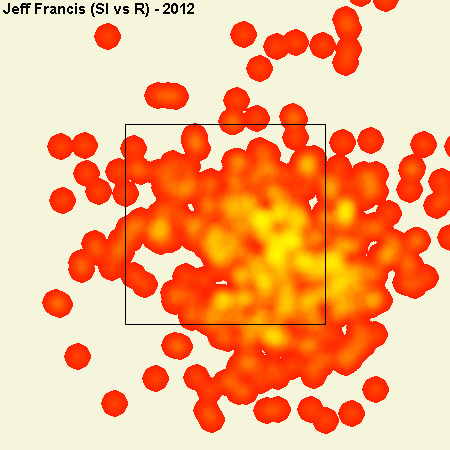 As you can see, his changeup is located in the exact same spot against opposite handed batters, so identifying which pitch if which will be key. 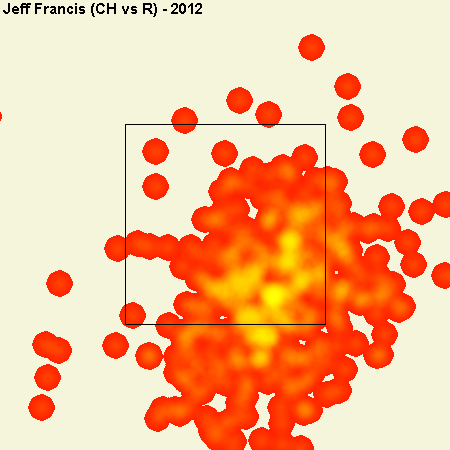 Should Lind Play: Sure

Adam Lind went 0-3 last night against another left hander, but it'd be silly to make these sit or play decision based one bad night. Francis has allowed a .304 wOBA against him by lefties and a .355 wOBA against him by righties and this year lefties are only 6-44 against Francis. I'd imagine Lind gets 5-10 games against lefties and then the Blue Jays will decide whether he will go back to a strict platoon or not.

My lineup for today: