With the Blue Jay winning 8 in a row, you would think our best player would be leading the way. Well, he isn't.

The number that catches my attention is the 4 walks. Generally even when Jose is in a slump he'll take walks. This month, he has 4 walks in 74 plate appearances. For the sake of comparison, J.P. Arencibia, has 3 walks in 55 plate appearances. When Jose has the same walk rate as JP, you know there is something wrong. 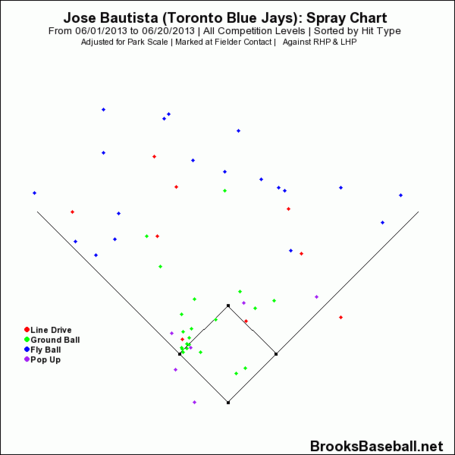 As you an see there aren't a lot of hard hit balls. There are a lot of pop ups.

Pitchers are pitching him differently:

I'd imagine he's getting more pitches in the strike zone because he's not hitting them.

The other change is the type of pitches he's seeing:

Never before, in his entire career, has he seen over 35% breaking balls in any month. Never before has he seen less than 50% hard stuff. It does look like pitchers are pitching him differently. And, as long as it is successful, they will continue to pitch him this way. Success breeds imitation.

He generally has the hardest, most violent swing out there. Lately, we have seen a lot of soft, off-balance swings. I'm sure he'll turn things around. And I hope soon. It is hard to believe that we have won 8 straight games, and Jose's hit just just .156 with just one home run. One very important home run, that tied up the first of the 8 wins in the bottom of the 9th, giving us the chance to win in extras. 8 straight wins and our best player has just 2 RBI.

Maybe we need someone to drill him. Maybe he's trying so hard not to blow up at the umpires that he's lost a little of the fire that makes him Jose Bautista. Or maybe it is a cold streak. The fact that we are winning makes it a lot easier to deal with.