Who Are Ya: Jason Hammel

Share All sharing options for: Who Are Ya: Jason Hammel

Jason Hammel takes on R.A. Dickey tonight as the Blue Jays try to keep the good times rolling. Hammel hasn't been very good this year pitching to a 5.24 ERA and a 5.07 FIP with ugly strikeout and walk rates combined with a fair .304 BABIP. He does have seven wins in 14 starts, which shows you how stupid that stat is.

Hammel mainly throws four-seamers, sinkers, and sliders, with the occasional changeup and curveball. His hard stuff sits mid-90's, while his slider and changeup sit in the mid-80's. His introduction of a sinker really helped Hammel have a solid 2012 campaign, but similar pitch usages in 2013 has failed to produce similar results: 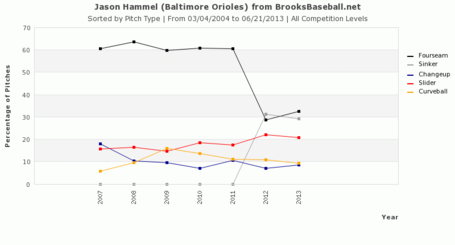 Hammel's fastball looks to be pretty hit-able (and it has been) to left handers as it's rarely thrown down in the zone, usually ending up elevated on the outer half: 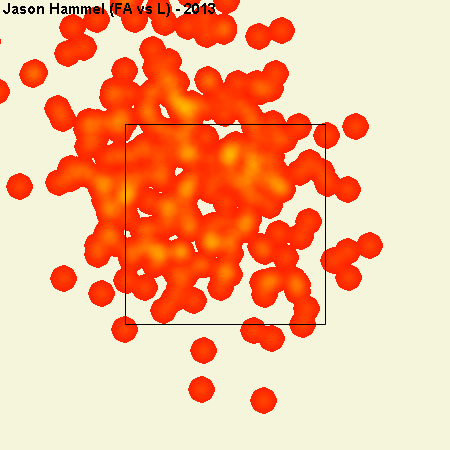 Hammel is a righty and lefties have had success against him. A mainly fastball pitcher against Adam Lind (and Colby Rasmus) is the perfect situation.

For Jason Hammel's "Find the Link":

Find the link between Jason Hammel and the Arizona Diamondback who took over the infield utility role after former Blue Jay John McDonald was traded.

This is a good match-up for the Blue Jays and a good opportunity to keep the streak alive.