Who Are Ya: Miguel Gonzalez (Take Three)

Share All sharing options for: Who Are Ya: Miguel Gonzalez (Take Three)

Miguel Gonzalez faces the Blue Jays for the third time this season (first preview here), going up against Chien-Ming Wang. After recently becoming a father, Gonzalez looks to continue his solid season that has him with an ERA of 3.75 today. In his first appearance against the Blue Jays on April 23rd he went six innings allowing three runs. The second appearance took place May 26th, with Gonzalez going 5.2 innings allowing only one earned run on seven strikeouts.

As he usually does, Gonzalez pitched against the Blue Jays mainly using his fastball, sinker, and splitter to get outs. The splitter has been the go-to out pitch for Gonzalez this year, similarly to how it was last year. In the May 26th game, Jose Bautista struggled surprisingly against Gonzalez's fastball striking out twice to the pitch, once looking and once chasing on this elevated heater: 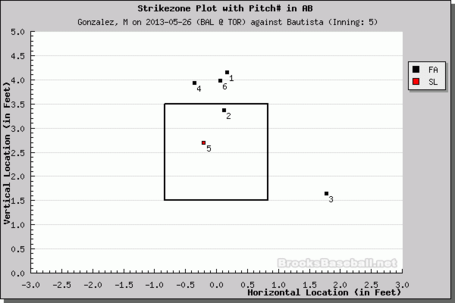 On most of the hits the Blue Jays got against Gonzalez, they took advantage of a poorly located fastball that Gonzalez is prone to throwing a couple of times per start. With his hard stuff in the low 90's, the Blue Jays will likely try to force Gonzalez into hitter's counts to avoid his wicked splitter and hone in on his fastball.

This feature has become almost obsolete thanks in large part to Adam Lind lighting the world on fire recently, hitting .389 in June. He's going to get the start against the righty Miguel Gonzalez. In the April 23rd game Lind was 1-2 with a walk against Gonzalez and in the May 26th game Lind went 1-3 with two strikeouts struggling against the splitter.

The hopeful lineup for today's game:

For the "Find the Link" today:
Find the link between Miguel Gonzalez and the starting shortstop in the Blue Jays second year as a franchise.

As requested, here's the current leaderboard:

Enjoy the game (and watch the Le Mans 24 hour race during commercials)!