Who Are Ya: Jeremy Hellickson (Take Three)

Share All sharing options for: Who Are Ya: Jeremy Hellickson (Take Three)

Right-hander Jeremy Hellickson takes on the Blue Jays for the third time this season. His BABIP dragons have finally caught up to him this year causing his ERA to balloon to an ugly 5.50. The original preview with some interesting points on Hellickson oft-used changeup can be found here. His two appearances against the Blue Jays came on May 6th and May 22nd with the latter appearance much better than the former. On May 6th, Hellickson went 5 innings giving up 3 earned runs on 6 hits with 4 walks (the Blue Jays won the game 8-7). On May 22nd, Hellickson went 8 innings allowing 2 earned runs on only 4 hits with the Blue Jays winning 4-3 in extras. Fernando Rodney gave up home runs in the ninth inning in both games to continue his horrid season.

In both games, Hellickson continued his weird usage of his changeup, throwing it very often against right-handed hitters. 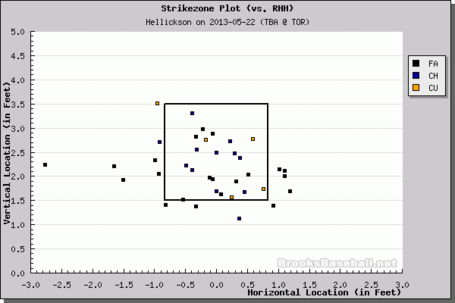 Against lefties he stuck to his normal routine of pitching them away often trying to sneak the curveball over for strikes like he did against Lind for this strikeout (strike three was a borderline call): 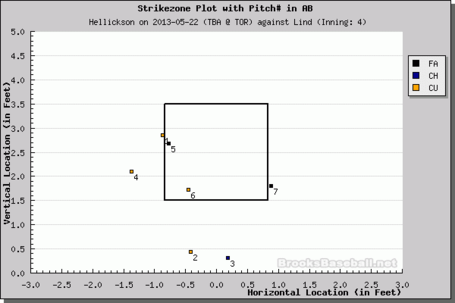 It still seems so strange how Hellickson leaves so many pitches outside the plate on the arm side. If I was the Rays, I'd be trying to find a fix that allowed him to locate on both sides of the plates more easily as it must be fairly easy for the hitters to sit on that location. 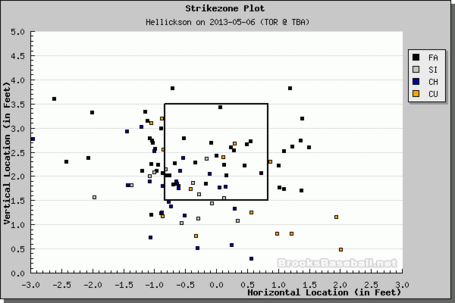 It's become clear that Adam Lind isn't slowing down anytime soon and he should be in the lineup every game. This means that something new has to replace "Should Lind Play" and that new feature is:

Yes, now that the Blue Jays are looking to be hitting their stride it's time to look back and laugh at the things that were muttered in April and May on Bluebird Banter. I think the term for this is hubris, but it's been a few years since high school english class. Everyday there will be a comment posted from a thread from the beginning of the season when all hope was lost, with the poster's name not included (you don't have to find who said it, this isn't a witch hunt!). I said I would do this in a recap thread a while back when everyone was looking for the nearest bridge to hop off, and I'm glad the Blue Jays have granted me the opportunity to do so.

The first edition is a doozy:

This team is an embarrassment

It is top to bottom utter failure. Hard to tell where to begin, but the best place to start is that most hitters have no approach at the plate. It is basically a home run hitting contest where it doesn’t matter if you strike out.

There is no situational hitting, no punching the ball to the right side to move runners over or get out of the double play, never a productive out. Complete selfishness.

The manager is responsible for changing this. He hasn’t. Veteran players could set an example. They haven’t. Now it is up to the fans to stop coming to games.

Anyone who is still optimistic is simply delusional.

But now the postseason is within view!

The lineup I'm hoping for today:

The "Find the Link" for today:

Find the link between Jeremy Hellickson and his teammate Alex Cobb and K's.