I have a brief version the MMMM today (no Down on the Farm or Around Baseball sections) as I have a rather lengthy preamble. It's been a good weekend for me having gone to see Jose Reyes's and Kevin Pillar's Buffalo debut on Friday, attended the Session Toronto Craft Beer Festival Saturday, and caught the Blue Jays' 11th straight win down at the Rogers Centre Sunday.

Speaking of Reyes, the Blue Jays are not rushing him back à la Brett Lawrie since they are enjoying a bit of a winning streak. Reyes is scheduled be in Bisons uniform this evening as the Buffalo wraps up a four-game series against the Durham Bulls at 7 pm tonight. Starter Ricky Romero will have to get his innings in tonight as the Bisons bullpen is probably tired after a record 14-inning win on Sunday, in which Jose Reyes went 2-for-5 as the designated hitter (nothing is wrong with him, it was always planned that he would DH on Sunday). After Monday, the Bisons and Reyes will part, with Buffalo's team heading down to Georgia to play Gwinnett and Reyes heading to Manchester to play a few games for the Fisher Cats. This means that it is likely that Jose Reyes will be re-joining the big club at Fenway Park this upcoming weekend, as the Fisher Cats play just over an hour's drive away from Boston. This is great for the Blue Jays' relationships with its affiliates, spreading Reyes's major league rehab with both the Bisons and the Fisher Cats.

In terms of events, the Blue Jays are on the road in Tampa Bay to start the week and Boston to end the week, so there are no games to head to in the Rogers Centre, but that doesn't mean there's a lack of baseball activities in and around town!

I'd like to take this chance to thank sports artist Chris Ripley for sending me this drawing commemorating George Bell's induction! Be sure to go check out his stuff on the link above and give him a follow at @bluejaysart. 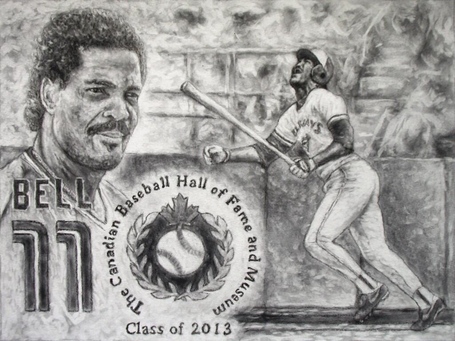 Will these Blue Jays keep flying high? - Baseball Nation
Rob Neyer looks at the roster and thinks that, while the Blue Jays have been enjoying regression lately, it might be over pretty soon. I took a quick glance at FanGraphs, especially interested in the numbers for the Blue Jays' relief corps, which has been especially good lately. In the month of June, Jays reliever have had a 0.84 ERA, but a 3.27 FIP (although even 3.27 is not that shabby). They, as a group, have been enjoying an exceptionally low .187 BABIP and an exceptionally high 88% strand rate, so it looks like the big green and red dragons are lurking behind the corner ready to show us the other side of regression. They have, however, been getting an great K% of 23.9 but are still walking folks at a rate of 8.6%.

Or, you know, screw analysis and just enjoy the good times. Your choice.

Reflections on a Winning Streak - The Tao of Stieb
The Org Guy's view on the Jays' winning streak.

"The caps and jerseys are worn a little more proudly; the water-cooler chatter is a little more confident. It's true that the Jays haven't won anything yet, but it sure feels better to know they haven't lost it all yet either."

Janssen strives for perfection each time out - Blue Jays
Casey Janssen credits a chat with Josh Towers--Josh Towers!--for changing his mental approach on the mound.

"You don't want to settle for mediocre," Janssen said. "I want to set the bar as high as I can and try to achieve [perfection]. If I don't, hopefully I'm pretty darn close to it."

The Jose Bautista Staredown: Darren O'Day Edition - The Blue Jay Hunter
Ian writes about Jose Bautista's recent "thing" with Darren O'Day and thinks that while Bautista would "occasionally run his mouth, he backs it up." I don't really care who started the whole thing, or what (if anything) happened behind the scenes, I just really really like angry JBau smashes.

Jays notebook: O'Day explains Bautista chirp - Sportsnet.ca
Darren O'Day says that the thing he had with Jose Bautista is over. How boring. I want more controversy!

AL East shaping up as race for the ages - ESPN
Predictions are for fools but this one might just come true: the AL East race is wide open and all five teams have a fairly decent shot at capturing the title. I don't know if anyone can actually predict the winner with any confidence anymore (except for those who participated in the ESPN poll below at least) but I'll ask yall to make your prediction in a poll at the end of this piece. David Schoenfield is predicting that the Blue Jays and the Rays will tie for second place and will play a tie-breaking playoff game. Who do you think will start for the Blue Jays in that game? (My prediction: Jamie Moyer)

Sizzling Blue Jays won't just streak and fade - ESPN
Christina Kahrl looks at the Blue Jays' resurgence from an outsider's point of view. What's the most interesting (for me at least) is the Sportsnation poll asking which team will win the AL East. Among the nearly 5,000 votes, 58% went to the Blue Jays. 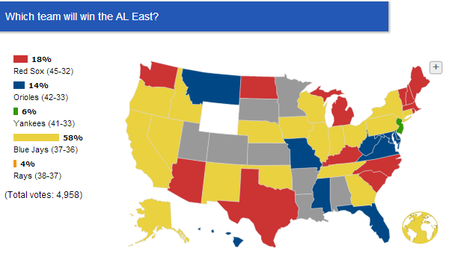 A look at ESPN's geographic plot of the votes showed that two-thirds of the vote came from outside the United States (probably most of those from Canada), which explains the extreme Blue Jays bias. In what is probably small sample size thing, the Jays are edging the Yankees by 10 percentage points in New York (213 votes).

Blue Jays Are Beginning to Pick Up the Pieces - NYTimes.com
Back to reading: Tyler Kepner spoke with Alex Anthopoulos last week and the general manager was trying to keep himself focused and "on an even keel" during the long winning streak. “We’re playing better, but we couldn’t have played worse,” Anthopoulos said. Kepner's piece also includes a bit on the Dodgers' and Diamondbacks' plans to start off the 2014 regular season with a matchup in Sydney, Australia.

Buffalo Bisons Host Star Wars Day - MLBFanCave.com
Canada's ambassador to Major League Baseball April Whitzman writes about the Buffalo BIsons' Star Wars Day, which happened this past Saturday. I wish I could've been there for that game but I had a that beer festival to go to (I live a hard life). April also has a fantastic picture featuring Edwin Encarnacion, Emilio Bonifacio, Jose Bautista, and Esmil Rogers taking a picture dressed to the nines... and Munenori Kawasaki photobombing it! I would not have guessed that Rogers was a bow-tie guy.

If you are a Twitter user, be sure to follow Tom Dakers, who operates the @bluebirdbanter account. Nick Ashbourne (@Nick_Ashbourne) just joined Twitter this weekend so give him a warm welcome by giving him a follow. Other Bluebird Banter contributors on Twitter: Blake Murphy (@BlakeMurphyODC), TFSML (@TFSML), Carm (@carmmcc), Shermanator91 (@noah_sherman), Emily G (@emilyg819), Jared Macdonald (@Jared_Macdonald), Woodman663 (@BosmanBaseball), and yours truly @Minor_Leaguer.