Who Are Ya: Matt Moore (Take Two)

Share All sharing options for: Who Are Ya: Matt Moore (Take Two)

Matt Moore takes on the Blue Jays tonight as they try to start a new streak that is even longer than the last one. Moore faced the Jays on May 8th in a game that the Rays won 10-4 (Ricky Romero pitched for the Blue Jays). Moore went 5 innings allowing 2 runs on 6 hits and surrendering 4 walks. In the first two months he was dominant but in June his season took a nosedive.

So now is the perfect time to face Moore for a second time.

In the May 8th game the Blue Jays lineup featured nine right handers. The key in the game was either waiting for Moore to walk you or getting into fastball counts and pouncing on the pitch like Edwin Encarnacion did on this pitch he took to the seats: 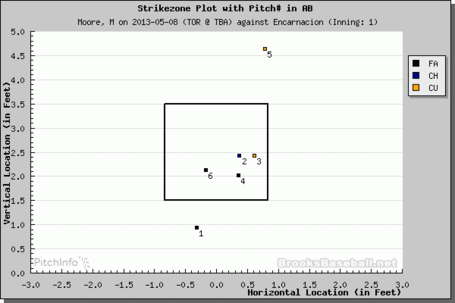 Where Moore is dangerous is when he's locating his curveball and changeup for strikes, which he did at times during the May 8th start. He used his curveball heavily against Jose Bautista when striking him out in the fifth inning. 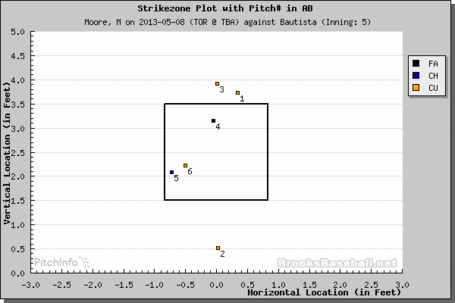 As I said earlier, no left handed hitters faced Moore on May 8th so it will be interesting to see if Adam Lind is thrown into the lineup today.

My lineup would be:

As it turns out, it's impossible to leave all the left-handers out of the lineup with a short bench.

But, when a business is failing as bad as the Bluejays are this year, Changes need to be made. People should lose their jobs!I would start with AA, who is the architect of this failure. He should be held responsible for assembling this group of players?The new GM should immediately get rid of Gibbons, who has not been able to lead this group. The new Manager should review the performance of the coaches, and make changes where necessary.They should forget 2013 and make plans for the future by unloading All of the "deadwood" as soon as possible, that would include, Lind, Izturius, DeRosa, Blanco and Bonifacio and replace them from the minors or waivers. Then, plans should be made to unload Bautista for prospects, Rasmus for anything. And admit to the failed rehabilitation of Cabrera, and cut him loose. That would leave JP, Reyes, Lawrie and Encarnacion to build the team around. As for the pitching staff, I would let Josh J walk after this year, Retire Buehrle and make bet use of whats left.On another note, how is it possible to build a championship team by making trades with the likes of the Miami Marlins or Houston Astros. Players from those types of organizations are Losers!!!

Losers I tell you!

Find the link between Matt Moore and the war fought between the same countries that are going against each other in the game tonight.