Share All sharing options for: We'll Miss You Munenori Kawasaki

First things first, you should being playing this song for this post.

On April 13th, Munenori Kawasaki was called up from Buffalo to fill the huge void at shortstop left by Jose Reyes. Everyone knew of Kawasaki's gif-ability, but no one was quite sure what was in store in the months to come.

His time in Seattle in 2012 included such gems as the fake steal jog:

and of course dugout dancing, which definitely was a sign of things to come:

It didn't take long for him to fit into the Blue Jays team quickly learning all the signs from fellow players:

He didn't contribute much on the field for the first couple weeks of his time in Toronto, but on May 26th he cemented himself as a fan favourite in Toronto hitting a walk-off double against the Baltimore Orioles:

If putting the team on his back wasn't enough, his post-game interview with Arash Madani definitely showed Blue Jays fans a glimpse of what was to come from the Japanese shortstop with a weak grasp on the English language:

The post game media scrum in the clubhouse on the same day gave an even deeper glance into the book of phrases Kawasaki was so proud of:

The phrasebook made another appearance during a Mark DeRosa interview on "Intentional Talk" broadcast on MLB Network. This clip quickly went viral and allowed baseball fans south of the border a glimpse of the joy Kawasaki was bringing Blue Jays fans:

One day later he continued his charming ways while signing autographs for his new fans:

As his reign with the Blue Jays was coming to an end he decided to go out in style with his first career homerun:

On his final flight with the Blue Jays he decided to show his moves one last time after flexing his muscles at the plate:

Munenori Kawasaki's time with the Blue Jays came to the end similar to the way it started. With confusion, language barriers, and a lot of laughs:

Originally I was quite annoyed by all of the love for the soft-hitting middle infielder, but I have to say even I am sad to see him go.

The situation isn't all depressing though as the Blue Jays' star shortstop, Jose Reyes, has returned from his lengthy rehab and will start in this afternoon's game! Just in case you forgot what Reyes was like, here's some GIFs of him too.

Not many people could go head to head in a dance competition with Munenori Kawasaki, but his replacement at shortstop could be one of those people:

He also has some of his own baserunning tricks up his sleeve:

So now that we've taken a trip down memory lane, how should we Blue Jays fans feel about the return of our other loveable shortstop. Pretty happy I'd say:

Just to make it official: 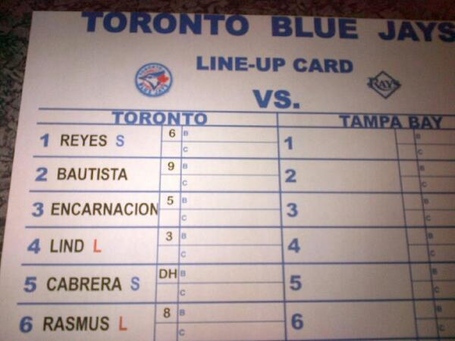