Who Are Ya: Jon Lester (Take Three) and Wang

Share All sharing options for: Who Are Ya: Jon Lester (Take Three) and Wang

Jon Lester takes on Chien-Ming Wang tonight as two pitchers going in different directions face off. The first two preview of Lester are here and here. On May 10th Lester faced the Blue Jays and dominated them going 9 innings in a 1 hit shutout. Since that game though, in 8 appearances he's allowed 35 earned runs in 47.2 innings (6.61 ERA) and hitters are getting on base nearly 40% of the time against him. The Red Sox think he's picked up a mechanical problem although trusting John Farrell to know what's going on is probably a bad idea. 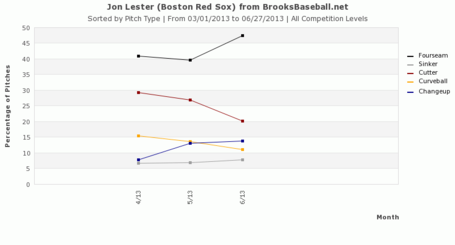 A quick point on Chien-Ming Wang that I noticed while going through his pitch/FX page. This year he's thrown 23 changeups (8.36%) and hitters have swung at 10 of them. Of those 10 swings, 7 of them have been whiffs, which could be slightly telling besides the obvious small sample size. A possible reason for all these swings and misses could be the movement on his changeup compared to his sinker. 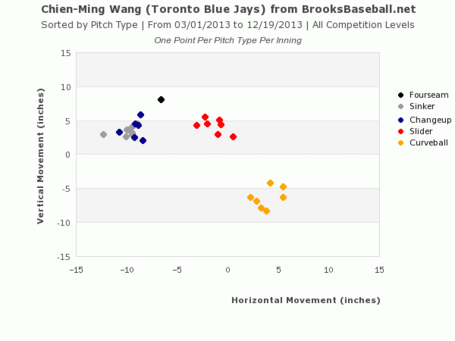 As you can see, Wang's changeup has movement that looks very similar to that of his sinker, but is averaging 12 MPH less so far this season. A possibility for the success of his changeup is that hitters could think they read the sinker coming, but it is actually the changeup causing them to swing early and whiff on the pitch. This two pitch combination could be key going forward for Wang to keep having successful outings.

Criticize the guy who dares to call out these jokers.
Fine. If I’m in charge, then Anthopoulis has been fired. He blew all that money.
Fire Gibbons. Cut Izturis. Trade Rasmus for a middle infield prospect. Bring up Gose and start him in CF. Bring up Thole and hit Arencibia every day at either catcher or DH. Bat Bautista 7th.

Is that enough? This is the worst team in baseball, everything goes.

Good thing we didn't do that.

My hopeful lineup for tonight is:

No, I don't think Adam Lind should play today.
I've pretty much exhausted all interesting links for Jon Lester in the previous previews so your internet scouring skills get a rest today.
How about a four game sweep of these insufferable Red Sox? That'd be swell Blue Jays.