One bad inning ruins game for the Blue Jays.

I should just stop there.

That second inning was awful. I'm totally against pitching around someone in the first inning with no one on. But Wang (I don't know why we can't just spell it Wong) seemed not to want to pitch to David Ortiz. So Ortiz is walked, and Wang still can't find the strike zone for Mike Carp. Two walks. Wang doesn't have the stuff to get away with walking the first 2 batters in an inning. Daniel Nava singled off the Monster. 1-0. Jarrod Saltalamacchia hit a line drive up the middle. 2-0. Stephan Drew hit a fly ball to right field that Jose Bautista totally misjudged. It should have been an error, but it was ruled a hit. 3-0. Jose Iglesias ground ball single. 4-0. Jacoby Ellsbury ground ball single. 5-0. Shane Victorino ground ball, but this one's a double play. Yay. Dustin Pedroia home run. 7-0.

And that was it for Red Sox scoring. It was more than enough.

We got a couple of runs in the 5th off a Maicer Izturis double. And a couple more in the 8th, when Rajai Davis, Izturis and Emilio Bonifacio loaded the bases. It looked like we had a shot, for a moment, but a hard hit line drive from Jose Reyes was turned into a sac fly out. Jose Bautista soft ground out scored another run. And Edwin Encarnacion had a hard hit fly was caught.

There was some kind of strange bullpen usage by Gibby. If this wasn't the game to use Dustin McGowan, I don't know when you would use him. Down by 3 in the 8th, and you use Delabar instead of him? Or if not McGowan, why not Neil Wagner.

And why not pull Melky Cabrera, down by 7? My legs hurt when I watch Melky run. On a cold wet night, why not give his legs a rest?

@KrisLoHomes came up with this on Twitter, when I suggested Melky would soon need a Sedway to patrol the outfield with. Update, I'm reminded it wasn't my idea first, @SebFromHawk suggested the idea 10 days ago. 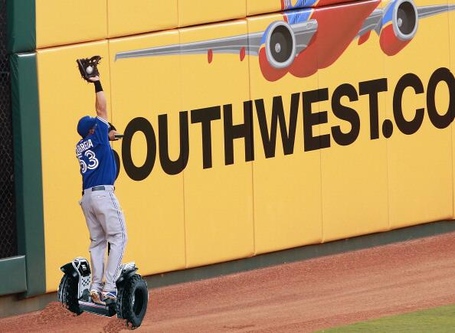 Jon Lester came out of the game in the 8th with some sort of injury. I haven't heard what it was.

Considering the 7 runs were scored in just the 2nd inning, the 806 comments, posted by 51 of us seems pretty good. Ryan H gritted out a win. Great work in a losing cause.