Who Are Ya: Allen Webster

Share All sharing options for: Who Are Ya: Allen Webster

Red Sox rookie Allen Webster gets the start tonight against Josh Johnson at Fenway this evening. Webster is a 23-year-old right hander from North Carolina, who was drafted in the 18th round of the 2008 draft by the Los Angeles Dodgers. He was traded to Boston in the blockbuster deal last summer:

Webster was a mid to high level prospect before being called up a couple times this year for spot starts. In three starts (in three different months) Webster has thrown 12 innings allowing 15 earned runs walking 6 and striking out 12. His best start was his first one which came all the way back on April 21st against Kansas City.

Webster throws the main five pitches (both four-seamer and sinker) mainly focusing on a mid 90's fastball mid 80's changeup combination with his slider as the main breaking pitch. His changeup has huge swing and miss potential (62.86% whiffs/swing in his three starts). As you can see his changeup resembles his sinker in terms of movement and his curveball looks to be similar to his slider with more horizontal run to it. 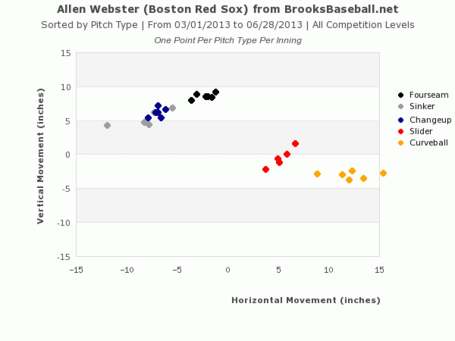 Here's a preview of what his mechanics and fastball look like from overthemonster.com

Since some people were saying this feature was discontinued too early, I'm bringing it back in a more compact form. On days like today against righties, there won't be much of a write up because it's clear Adam Lind will play today. Webster has the traditional splits in the minor leagues so far this season being tougher on righties although Lind will have to be ready for Webster's changeup as he throws it a lot against left handers.

My hopeful lineup for today:

This seven infielder business is not a good idea in my opinion. The bottom half of the lineup will always be a black hole of outs.

I know I will get major backlash for this. But I really could care less. Why does everyone here lick AA’s *** constantly. What has he done that is so freakin awe inspiring. Yes the trade this year was good, but I was not blown away like all the homers here on bbb. The lineup had sooooo many what ifs. I was less concerned about the pitching, but they will pull it together. The offense is pretty much playing to my expectations. Go ahead and rip me apart. Been a fan for 25 years, and the years of mediocrity are just exhausting. At least I have the islanders, Knicks, and dolphins. Go jays. There’s always next year when Colby, Lind, Laurie, izzyor boney, Jp, melky, COULD put it together. Sighhhhhhhhhhhhh. Time for NHL playoffs. Later

Find the link between Allen Webster and the pitcher whose team has gone 3-0 against the Blue Jays this year in his starts.