Blue Jays 6, Red Sox 2: Jose Bautista is the One Who Knocks

Jose Bautista hit a pair of bombs, had an outfield assist and stole a base for good measure, getting the Jays back on the winning track.

Share All sharing options for: Blue Jays 6, Red Sox 2: Jose Bautista is the One Who Knocks

"You clearly don’t know who you’re pitching to, so let me clue you in: that is not the Green Monster, Boston. I am the monster. A player misses his spot and gets blown up, and you think that of me? No! I am the one with knocks!" – Jose Bautista, June 29, 2013

Yes, Joey Bats had it going on Saturday, crushing, and I mean CRUSHING, two home runs over the Monster at Fenway Park, leading the Blue Jays to a 6-2 victory over the Red Sox.

The first, a solo blast off of Boston starter Felix Doubront, was a no-doubter to left that landed not in the bleachers but on Lansdowne St. The 2-0 heater was right down the chute and Bautista made no mistake smashing the windshield of Sully the Southy or some other unlucky fan.

In the eighth, Junichi Tazawa let a forkball catch too much of the upper part of the zone and Bautista jumped all over it, just missing the lighting fixtures in deep left-center. That two-run shot put the Jays back in front after the bullpen had coughed up a 2-0 lead in the seventh.

And in the ninth, just for good measure, Bautista ripped a groundball through the legs of third baseman Jonathan Diaz. Diaz, a former Jays’ prospect making his major league debut, was unfairly credited with an error, stealing an RBI from Bautista as Reyes scored from first on the play (Bautista would then be thrown out trying to take third base). Look, I get that it went through his legs, but if a ball is hit hard enough that it goes all the way to the wall, it was probably a degree of difficulty play for the infielder and maybe not worthy of the error. Craig Breslow can handle the ERA hit.

Anyway, Bautista’s day ended with a 2-for-4 line with a walk, plus the two homers and three RBI, though really he should have had three hits and four RBI. He also stole a base after the walk, his sixth of the year without being caught, because Felix Doubront seemed to forget baserunners don’t just disappear once on base. Oh, we’re not done – he had an outfield assist, too, cutting down Shane Victorino at home.

Other Hitters
But we’re not done talking about Joses – Reyes also had a great game, beyond just looking very steady at shortstop. Reyes had a pair of hits, joining Bautista and Lind (three hits) in the multi-hit game department. Lind actually tripled in the eighth, believe it or not, though he was stranded, and singled in the game’s opening run in the first.

Rajai Davis also chipped in with a hit and two walks, stealing a base and being thrown out once. He’s really not a big downgrade from the way Melky Cabrera was playing, enough so that I’d say you’d gladly take a month of Davis to ensure a better Cabrera later on.

J.P. Arencibia did his J.P. Arencibiest, striking out twice to push his K:BB ratio to 87:8, the 17th worst since 1900 for any player with at least 200 plate appearances. He also allowed a wild pitch to sneak through his legs. However, and I hope commenters are reading the entire paragraph and not skipping ahead to comment, Arencibia also made a few great plays in the field. He did a fine job framing Esmil Rogers’ low pitches, blocked the plate beautifully on TWO plays at the plate and saved an errant Colby Rasmus throw from going awry and allowing another run to score.

Speaking of The Truth (a nickname I’m toying with for Colby Rasmus since he’s become one of the biggest Three True Outcomes guys in baseball), he had an awesome diving stab to save a run in the fifth that is probably GIFd somewhere out there.

Esmil Rogers
Is everyone back on the Rogers train now? The other week at RotographsI took a dive into Rogers’ profile and concluded that what he’s done is probably sustainable for a fourth or fifth starter type. His sinker is for real and the combination of enough strikeouts, limited walks and hella groundballs should play anywhere. However, I warned that his Rays-Red Sox-Tigers stretch made him a no-buy for fantasy purposes.

Well, if you owned him today you walked away happy, as Rogers shut the Sox out over six innings. He allowed six hits and a lone walk, striking out six and showing an appreciable composure with men on base (although he was obviously aided by a few nice plays from his teammates behind him).

I was going to dive into the pitch data but it’s still ‘unadjusted’ which means the sinkers and fastballs are tough to tell apart. I can say, though, that he did an excellent job of keeping the ball in the lower third, and when he missed he usually missed for a ball rather than over the heart of the plate. 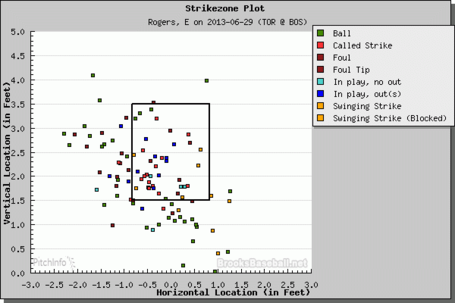 That pitch plot shows him hitting the heart a bit more than I remember, but you can see him keeping the ball down, at least.

Another impressive point was him coaxing eight whiffs with his slider in just 19 pitches. My article had concluded that he was using a regular fastball and a sinking fastball, a slider as an out pitch and a curveball as a show-me fourth offering, and that profile worked really well on Saturday even as the curveball usage grew.

For fantasy reasons, I still wouldn’t start Rogers when he draws the Tigers. But for baseball reasons, I’m getting more and more confident that the Jays have found a back-end starter here. Yes, the three-straight homers in Tampa were troublesome, but you’re talking about a one-inning blip over an otherwise stellar six starts.

The Bullpen
From there, John Gibbons went to Murtaugh for the seventh, but Darren Oliver got in some trouble. Oliver saved himself by throwing Salty out at home on a squeeze play, but left with a pair of runners on base when Gibbons went to Steve Delabar.

I don’t have a major issue with Delabar coming in against Jacoby Ellsbury, a lefty, because Delabar is split-neutral (or even reversed-split). He allowed a pair of singles, the second of which scored both Sox runs and coughed up the lead, but settled in from there, stirking out four of the next five batters. He finished with 1.2 innings, four strikeouts and no runs of his own. He also gave Mike Napoli his beautiful, beautiful Golden Sombrero.

Neil Wagner threw the ninth and allowed a walk but coaxed a game-ending double play.