Who Are Ya: Tim Lincecum

Share All sharing options for: Who Are Ya: Tim Lincecum

Josh Johnson makes his return to the Blue Jays tonight as he goes up against 28-year-old righty Tim Lincecum in what should be an exciting game to watch. Lincecum has had an up and down season pitching 65 innings with a 5.12 ERA and a 3.80 FIP. The gap between the ERA and FIP likely coming from a .320 BABIP and a 65% strand rate, although the bad fortune hasn't stopped rumours that Lincecum will be moved to the bullpen once the Giants have more starting pitching depth.

Before we talk about what Lincecum throws, take a look at the new Brooks Baseball website! Fancy. (EDIT: The pitch usage chart has the titles mixed up with the percent usage so I wouldn't rely on those too much) Anyway, Lincecum's repertoire features a four-seamer, sinker, changeup, slider, and a curveball. His changeup that often resembles a splitter is a tough pitch against lefties with a 48.39% whiff/swing this season. You can see how it tails down and away against lefties: 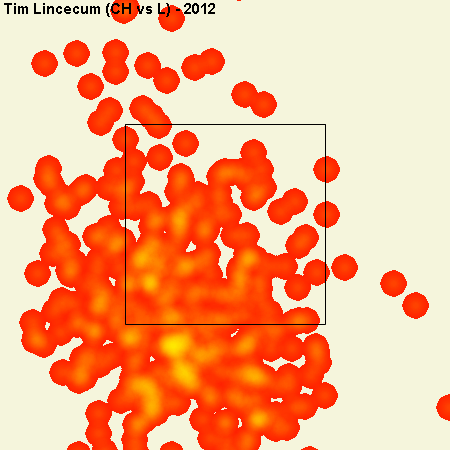 On the other hand (literally), Lincecum features his hard slider against right handers. Every year, Lincecum consistently locates his slider down and in the centre of the zone against righties, which is a little bit of a strange location: 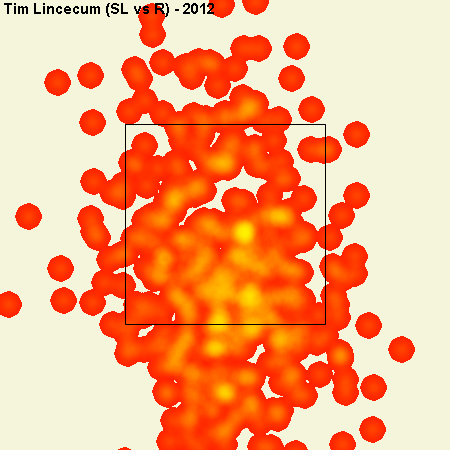 Most of Lincecum's pitches against right handers follow this pattern hanging around the centre of the plate or on the inner half. 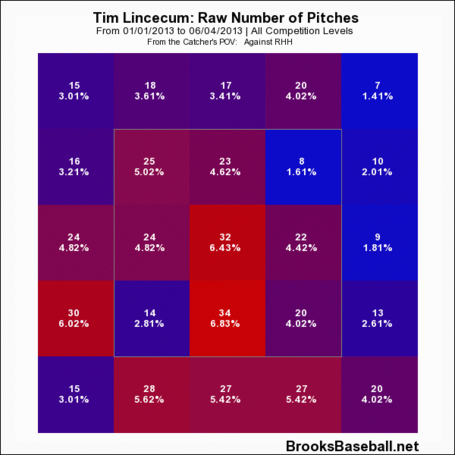 Over the course of Lincecum's career he's been essentially split-neutral. But in the past three years he's been much tougher on lefties possibly as a result of him fine tuning his wicked changeup. It really will depend on if the Blue Jays want to keep playing Edwin Encarnacion at 3B to get both Lind and Encarnacion into the lineup.

Who's Hot, Who's Not

In his past 10 games, Buster Posey has gone 13-40 with 2 walks improving his season average to .308 and his OBP to an unbelievable .391. Hopefully Josh Johnson doesn't give Posey any pitches to hit tonight.

The Giants don't have too many weak spots in their lineup, but Brandon Belt has had an up and down season hitting only .241 in his last 10 games with 7 strikeouts in 29 at-bats.

For today's tricky "Find the Link":
Find the link between Tim Lincecum and Father's Day.

This is definitely a game to stay up for, so enjoy!