Who Are Ya: Barry Zito (Take Two)

Share All sharing options for: Who Are Ya: Barry Zito (Take Two)

R.A. Dickey takes on Barry Zito this afternoon in the second half of a quick set in San Francisco. Going to be a quick write-up today as some sort of flu or virus is having its way with me right now and I'm pretty out of it. On May 14th Zito faced the Jays at the Rogers Centre and my preview is located here. He went 5.2 innings giving up 8 runs (5 earned) on 12 hits with 2 strikeouts and walks. The Jays eventually won the game 10-6 with Dickey facing off (and taking the win) against Zito on that occasion as well.

On May 14th he used all five of his pitches pretty evenly with his curveball being a solid put away pitch for the left hander. You can see how delicious the movement was on his curveball here: 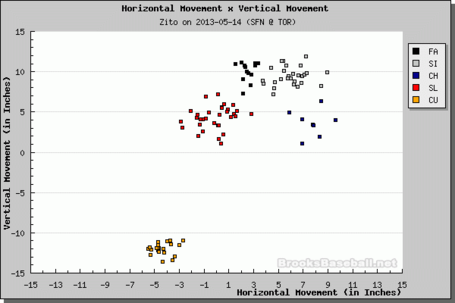 He made Colby Rasmus look silly with his off-speed repertoire in this fifth inning strikeout, which is exactly how Rasmus should be pitched. I don't understand why teams give him so many fastballs when it's clearly his main strength. 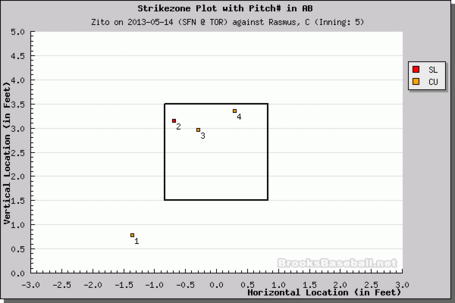 Surpisingly, Zito wasn't hit very hard in the May 14th start even though his fastball sits mid-80's, with 11 of the 12 Blue Jays hits on the evening being singles.

Adam Lind only got into the game on May 14th after Zito had exited, and I'd imagine that is also how this afternoon's game will play out. It's clear Lind will never get written into the lineup against lefty starters, and for that we should be grateful.

I was hopeful Lind wouldn't start last night against Lincecum because it was clear Adam would struggle against the tough split-changeup and alas he started and struck out twice and went 0-3. Hindsight victories are always fun.

My terrible looking lineup for today:

Find the link between Barry Zito and the band with the song "Smile Like You Mean It" (also the greatest band ever).

Edwin Encarnacion was just retired by Sergio Romo as I was finishing this writeup to end the first game of the series. I think it's time to sleep (as if I didn't want to vomit enough already).