Edwin Encarnacion is off to a solid start in 2013, but what can we expect from here on out?

2013 has been a tough season for Blue Jays fans in a lot of respects. The greatest source of the heartbreak is the massive disparity between expectations and outcomes. Suffice it to say there have been a lot of disappointments on this team. Luckily for those who don't like articles that are both massive in length and depressing in nature that's not what I'm going into today. Instead, I thought it might be interesting to look at one of the players pretty much meeting expectations at the moment. However, if you were hoping for a "hey check it out, this Jays player is meeting expectations, that's cool" type post that wraps up in a couple hundred words you are in for a nasty surprise. Firstly, you have terrible taste because that would make for an awful article and secondly I doubt you've read anything I've posted recently. I'm told that one should finish any introductory paragraph by actually getting the point, so I'm going to give that a whirl. Today the topic of discussion is Edwin Encarnacion and how there is more to his 2013 season than meets the eye.

As mentioned above, Encarnacion has pretty much met expectations so far. Most figured that he would come down slightly from his amazing 2012 season but maintain some of his gains, and that's exactly what's happened. Encarnacion's slash line sits at .265/.342/.522 and to put that in perspective here are some major pre season projections for the slugger coming into 2013:

Other than Rotochamp's overzealous projection (how do you predict that Edwin Encarnacion is going to hit .293?) he is very much in line with projections. He may be getting on base less than predicted but he's also hitting for a little more power. As I said, everything appears to be in order. The thing is that it's not.

What you can't see from Encarnacion's slash line in 2013 is his lefty/righty splits, which have been incredibly unusual so far. This is what his splits look like this year:

These splits would make more sense on Adam Lind than a right handed slugger who is known for mashing lefties. Thanks to the fine folks at Fangraphs we look into this graphically. Here's Edwin's career lefty/righty splits in isolated slugging, the statistic probably best encompasses the idea of mashing: 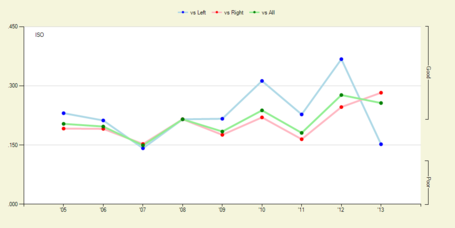 Can you spot the anomaly? For another look, here's a more all-encompassing statistic, wOBA: 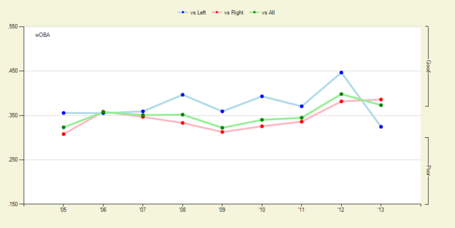 If we are following the blue line once again we see that Edwin's ability to hit lefties has mysteriously disappeared. That isn't really the sort of thing that happens. It is my firm belief that Encarnacion can still hit left handed pitching and do so with authority. This appears to be a statistical blip based on a very small sample size, 54 plate appearances in fact.

You are probably wondering why I even bothered pointing this out given that it's only 54 plate appearances. It is a well known fact that virtually anything can happen over a sample that miniscule. That's the point. It should be dismissed completely. The point is that Encarnacion's season stats are being weighed down by unsustainably poor performance against left handed pitching.

Ultimately, this article is a little bit of an exercise in misdirection. The blue line in this graph is much more dramatic than the red one, but in the end it is far less informative. Edwin's 54 PA against lefties almost certainly means nothing whereas his 206 PA against right handers are a little bit more substantial. What we can see is that since Edwin's arrival on the Blue Jays in 2009 he has become steadily more effective against same handed pitchers. The biggest gain was made between 2011 and 2012, as one might expect, and interestingly Edwin has carried this gain into 2013 so far. 206 PA still isn't an enormous sample and Encarnacion may regress against RHP as the season carries on. However, his increased effectiveness is a long term trend and far, far, more likely to hold up than his apparent inability to hit lefties this year.

Oftentimes a trap that fans fall into is to assume their players doing poorly will regress to the mean and do better, but when their players are doing well they tend to assume that they have simply improved. In a sense it appears that this is the trap I have fallen into here. I am dismissing Encarnacion's struggles against lefties and claiming that his improvement against righties could be for real. However, in this case what I am dismissing is 54 plate appearances worth of data and what I think might be real has been a five year trend. Hopefully that puts me in the clear.

Although making concrete predictions about baseball is something I prefer to leave to those who are far better with statistics than I am, I would say that there is a very significant chance Encarnacion's numbers improve over the course of the year. As he begins smacking southpaws the way he has always done, his numbers have potential to climb and get closer to 2012 levels. While his line against right handers may come down some, I don't think he is that far above his true talent level. More than anything, this data is reason for optimism. In days where optimism is in short supply, that's something to be treasured.