The 2013 Induction Ceremony at the Canadian Baseball Hall of Fame

Share All sharing options for: The 2013 Induction Ceremony at the Canadian Baseball Hall of Fame

At half-past-five on the morning of Saturday, June 29, I set off--with several friends in tow--from Toronto for tiny St. Marys, Ontario to attend Canadian Baseball Hall of Fame's Induction Day. The early trip was well worth it, as I got to be a part of the ceremony honouring former Blue Jays George Bell and Rob Ducey, former Expo and current Jays minor league coach Tim Raines, Canadian baseball pioneer Nat Bailey, and Blue Jays broadcaster Tom Cheek for their contributions to baseball in Canada.

The day began with a media event at the Lind Sportsplex in St. Marys, which overlooked a quarry that has been turned into a swimming pool for the town. There were representatives from the major sports networks, the local news stations, as well as Blue Jays video bloggers from Back in Blue, who cut a short video review of the day.

At the media event, I sat down at a table to talk with Rob Ducey, but I batted behind the Canadian Baseball Network's Alexis Brudnicki, who cleared the bases with her interview that you could read here. He spoke about the great work that Baseball Canada has done since his playing days and the difficulty of playing for Toronto as a Canadian.

I did not want to repeat any of her questions so I asked Ducey about the time in 2000 when he was traded from the Phillies to the Blue Jays on July 26 then back to the Phillies on August 7.

"I was happy I got traded back to Toronto, at that time they were in a pennant race," Ducey reminisced, "but within a week I went from throwing all my red garb out, getting blue garb, and then having to get rid of that! It was almost like an inconvenience--like, 'guys, make up your mind!'"

Next, I went to speak with Shirley Cheek, Tom's widow. Shirley was a wonderful person to speak with and she loved to speak about her late husband because she understood how important he was to the baseball fans in Canada.

During our talk, she told me that she and the Cheek family will be at the Rogers Centre on July 2 for a ceremony to honour Tom. Interestingly, I haven't seen any announcement from the club about it, so consider this your notice to make your way to the game this Tuesday! Jeff Cheek, Tom and Shirley's son, will be throwing out the first pitch, and all her grandkids will be there wearing Blue Jays gear with "CHEEK" on the back.

The induction ceremony itself was next and was held in a big white tent pitched, appropriately, on a baseball diamond. TSN's Rod Black was the emcee and was fantastic, softening up the capacity crowd by cracking a few jokes about Rob Ford, Lance Armstrong, and Brett Lawrie among others. He then called on the inductees, a bunch of invited guests like Tom Henke, Jim Fanning, and Cito Gaston, and several fans from the audience up to the front for an impromptu singing of "Take Me Out to the Ballgame." Being that it was Canada Day weekend, Black wrapped up his introduction by delivering a very good speech about being Canadian.

Bob Elliott then followed with a somewhat awkward recap of baseball in Canada since last year's ceremony--I could not discern whether he was trying to be funny or whether he wasn't comfortable speaking that morning. Then Jim Fanning, the Expos' first general manager and twice field manager, gave a speech giving praise to the Hall's founders and told a few stories about the early years of the Expos. He sympathized with Shirley Cheek having had to first sit through the weather at Jarry Park when her husband was broadcasting for the Expos, then having to do the same in Exhibition Stadium when Tom Cheek moved to Toronto.

The inductees (or their representatives) came next. Rob Ducey led off, and like the ones who would follow, spoke a lot about the support he received from his family, especially mom and his coach-turned-step-father Ed Heather, who had given him a chance to play professionally by convincing him to stay in baseball instead of returning to his beloved game of fast-pitch softball.

Canadian baseball historian Bill Humber then spoke for the family of Nat Bailey, who were not able to make it to the ceremony. Humber spoke about Bailey's entrepreneurial spirit, going from a peanut vendor at a Vancouver arena to the founding of the White Spot chain of restaurants. He was a successful restaurateur, but baseball was still in his heart, so he put in a lot of time and money to support baseball in Vancouver. In his recognition, the current Vancouver Canadians, who are the short-season A affiliates of the Toronto Blue Jays, play in Nat Bailey Stadium. Humber got a big laugh from the crowd after dropping a Munenori Kawasaki reference. 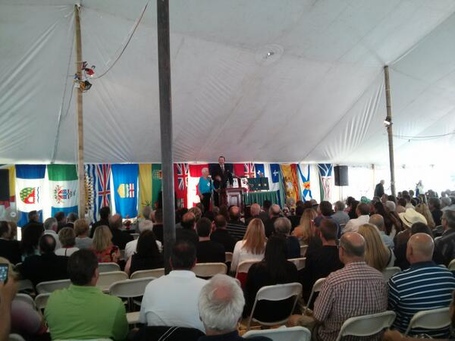 Tom Cheek was the next candidate to be inducted, and his son Jeff--who has his height--stepped up to the lectern to speak, with his mother Shirley standing right beside him for support. He spoke about his father's tremendous work ethic (something that is definitely needed to call 4,306 consecutive regular season games) and how as a young man he called every game available to hone his craft, including Friday night league bowling. He also thanked Dave van Horne for being the person who invited Cheek up to the broadcast booth after seeing him calling the game into a tape recorder down at Jarry Park.

"Behind every man is a stronger woman, my dad had that," Jeff said as he turned to his mother, choking up a bit. To him, the ceremony was as much about his father as his mother. Kevin Glew wrote about his encounter with the two Cheeks in a piece for the Canadian Baseball Network.

George Bell went up to the plate next and promised a short speech, but ended up giving a long--but great--one. Bell, known for being unpredictable with a mic placed in front of him, was unpredictably frank and funny. He thanked each one of his managers: Bobby Mattick for making him a left fielder, Bobby Cox for playing him every day, and Cito Gaston for guiding his teams to winning seasons. He even included the person who he apparently had a feud with, saying that he had nothing against Jimy Williams, but "when someone touches your territory, you get mad." Bell also talked about how Paul Beeston approached him in 1990, and seeing how miserable he seemed to have been feeling, told the 1987 MVP that it was time to leave Toronto.

"I'm a real Blue Jay," Bell said to the captive audience, "I consider myself Canadian," then went on to thank scouts Bob Engle and Al Lamacchia for convincing the Blue Jays to acquire him for $25,000 in the Rule 5 draft. Bell ended his speech by saying "I don't want to say too much more, I might run out of English." 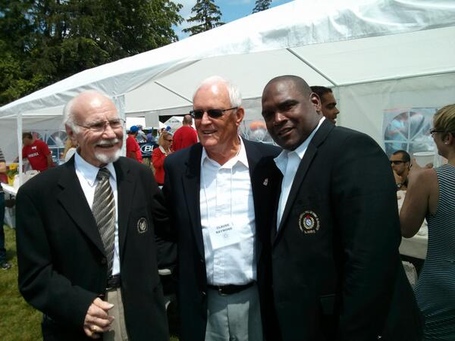 TIm Raines ended the players' speeches with a fantastic one of his own. He mostly focused on his family, and got emotional when he talked about how his parents had to miss the event because of health issues. He spoke about how he owed a lot to his mom while his dad was out making money for the family: "sure dad was the man, but mom was the backbone for many of us athletes." Unfortunately, his young daughters were also ill, so they were also not able to attend the ceremony.

Then Raines turned to talk about the Expos fans. He seemed to have absolutely loved his time in Montreal saying that only Youppi was the only one to get more publicity than he. In a nice touch, he apologized to Francophone fans for not speaking French fluently enough, then rattled off the few French words he knew.

The speech got emotional in a few instances, especially when he spoke about his return to the Expos for a second stint in 2001. In the Home Opener at Olympic Stadium, batting sixth, Raines stepped up to a rousing standing ovation, which lasted 5-6 minutes. The loud crowd at the Big O shook up the pitcher enough that he walked Raines on four pitches, who then promptly scored from first base on an Orlando Cabrera double. Melissa Couto wrote about The Rock in her piece for the Canadian Press.

Another long-time Blue Jays broadcaster received recognition on Saturday. Jerry Howarth was the winner of the Jack Graney Award for excellence in Canadian broadcasting. He was unable to attend the ceremony as the Blue Jays were in Boston, but according to Shi Davidi, the Blue Jays will be honouring him at the Rogers Centre on August 11. How fitting it is that Howarth's name plate appears right beside his late partner's on the trophy. 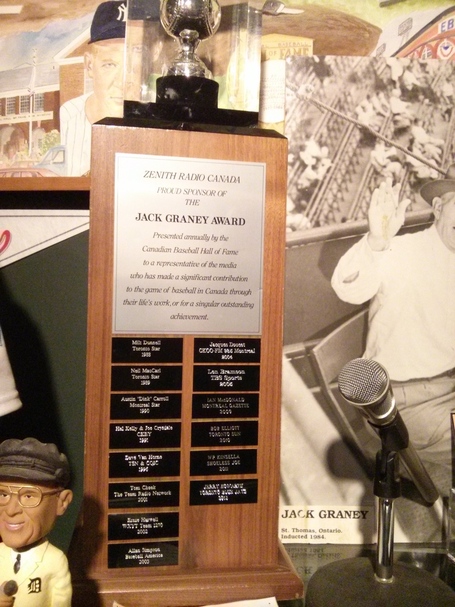 Induction Day was a fantastic celebration of baseball in Canada and great fun, to boot. It had a very small and intimate atmosphere, unlike Cooperstown. This was my first time visiting St. Marys, and I left wondering why it took me so long to go. Outside the Hall it is a really nice small town with a beautiful waterfall right downtown. It's certainly worth a day trip out there as you can also stop by for a show in nearby Stratford, especially if you don't need to head out at half-past-five.