Who Are Ya: Jose Alvarez

Share All sharing options for: Who Are Ya: Jose Alvarez

HAPPY CANADA DAY! R.A. Dickey will take on 24-year-old left hander Jose Alvarez today at the Rogers Centre. Alvarez signed as a amateur free agent from Venezuela 8 years ago by the Red Sox, then he was traded to Miami, and finally to Detroit never having much success in the minors. He's had a pretty good start to his major league career this year allowing 7 runs in three starts getting 7 strikeouts in his debut. He's in the Detroit rotation because Anibal Sanchez is on the disabled list currently.

Alvarez throws the five main pitches pretty evenly averaging high 80's on his hardstuff which could be why he hasn't been to the majors before this year. Command will be important for Alvarez as will be his secondary pitches if he's to have any success with Detroit. A good review by Fangraphs of Alvarez's first start can be found here.

A little preview of what we can expect to see from Alvarez:

Jose Alvarez throws his changeup a lot (35% of the time against right handers) so one of the keys will be avoiding whiffing on the heavily used pitch by the left hander. You can see he locates the changeup on the outer half of the zone getting 37% whiffs/swing thus far in his career: 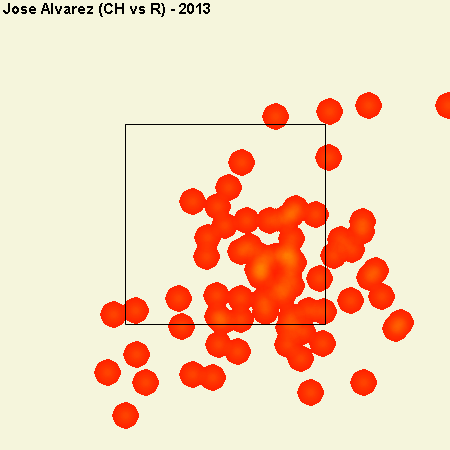 There isn't a lot out there about Alvarez and it looks like he's a AAAA pitcher that will need to have great command to survive in the big leagues.

The lineups have already been released so no need to wonder if Adam Lind will play today after leaving yesterday's game with back problems.

Mark DeRosa hitting fourth doesn't inspire too much confidence in the team, but at least Josh Thole gets the start today (small victories even if it's against a lefty). In his 3 starts, lefties have hit Alvarez harder than righties, but almost nothing can be read into that except the fact that his changeup is easily his best pitch. You'd have to imagine Adam Lind would be in this game if he wasn't hurt considering Thole, Rasmus, and Kawasaki are all starting.

No rant today because Canada Day should be full of positive stuff only (and because I don't have time to look for a good one). For the "Find the Link" :

Find the link between Jose Alvarez and the player drafted #11 in the same draft as Russ Adams.

Enjoy watching the game or celebrating Canada Day or both! Hope you all have a great day.