Who Are Ya: Justin Masterson (Take Two)

Share All sharing options for: Who Are Ya: Justin Masterson (Take Two)

Remember the first time the Blue Jays faced Justin Masterson? It was Opening Day, when the fans packed into the Rogers Centre to see the star-studded Blue Jays for the first time. If you want to look back on the optimism of early April, go and read the original preview here. Masterson put an end to the optimism quite fast going 6 innings allowing only 1 run on 6 hits with 4 walks and 5 strikeouts. Esmil Rogers will start for the first time against his former team tonight after spending 2012 in Cleveland.

The 2013 season has been an adventure for Masterson, dominating at times and getting smashed around during others. He has a 3.78 ERA and a 3.42 FIP this season although his ERA was 3.48 before his last appearance where he didn't see the end of the fifth inning in a slaughter by Detroit.

On the April 2nd appearance, Masterson threw fastballs, sinkers, and sliders. That trend has continued this year with Masterson throwing sinkers 38.30% of the time, fastballs 33.38%, and sliders 28.12%. You usually know what you're going to get with Masterson day in and day out, bringing a hard sinker-slider combination to the table. The sinker staying down and recording ground balls is key and he's had success doing that this year with the sinker getting 68.31% GB/BIP. Surprisingly, his K/9 of 9.16 is the highest in his career by far largely due to his slider get 40% whiffs/swing this year.

You can see how Justin Masterson gets his whiffs with his slider down and away against righties which has been a weakness for Blue Jays hitters all year: 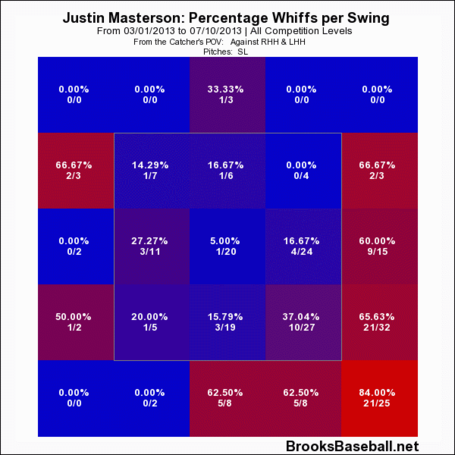 The sinker has the opposite effect, always riding in on same-handed batters (you'd have to think some of these inside sinkers hit the batter): 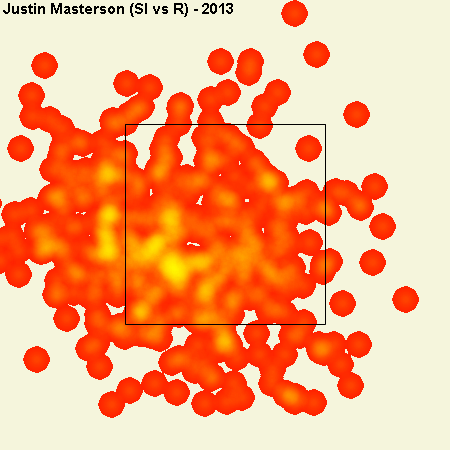 Justin Masterson has two pitches that are very tough against same-handed batters and none that are tough on lefties, so as you would expect there is huge splits against him. This year lefties have almost 100 points more in their wOBA and in his career the difference is almost just as large. There is no excuse for the Blue Jays not to stack this lineup with lefties and play the numbers.

Rajai Davis has looked a little awkward in left field during Melky Cabrera's DL stint (which might turn into a suspension?) so starting Bonifacio shouldn't be too much of a downgrade.
For today's "Find the Link":
Find the link between Justin Masterson and the sports movie released in 1993 that has become a cult classic based on a Winter Olympic sport.