Who Are Ya: Chris Tillman (Third Time's A Charm?)

Share All sharing options for: Who Are Ya: Chris Tillman (Third Time's A Charm?)

Quick look at Chris Tillman's third start against the Blue Jays tonight in a fairly important last series before the All-Star Break. Opposing Tillman will be Mark Buehrle who now has his ERA to a season low 4.50. Tillman's two starts against Toronto have both resulted in wins for Baltimore with the most recent one coming during Sean Nolin's debut. June treated Tillman well, winning all six of his starts with a 2.68 ERA followed up by a drubbing in New York in his only start of July. His ERA now sits at 3.92, while his FIP is more representative of his true performance this season sitting at 4.89 caused in part by his 3.41 BB/9.

Chris Tillman's heavy fastball usage has stayed fairly consistent this year, while his three secondary pitches have all been used fairly evenly among them: 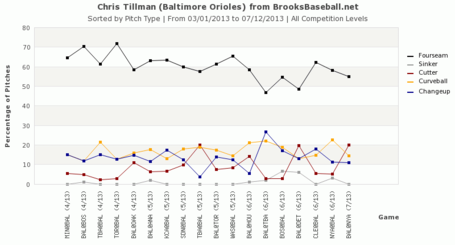 When Tillman was batted around by the Yankees in his last start it was mainly death by a thousand cuts as all 10 of New York's hits were singles! The key for the Blue Jays will be to stay patient and make good contact on his pitches without trying to do too much with them. Sometimes Toronto seems to swing for the fences too much when facing a fly-ball pitcher like Tillman.

The lineup for today I'm hopeful of seeing (reminder that Tillman has reverse splits thanks to his changeup and curveball):

For the third "Find the Link" of Tillman it was tough to find something interesting:
Find the link between Chris Tillman and the Blue Jays shortstop of the future until last November.

A series sweep in Baltimore would be exquisite.