Blue Jays' offense at LOBsterfest in Baltimore, lose to Orioles 8-5

Share All sharing options for: Blue Jays' offense at LOBsterfest in Baltimore, lose to Orioles 8-5

Let's start with the good:

And now the bad. Note the relative length of this section: 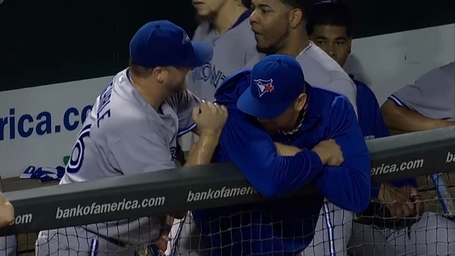 Perhaps, with a solid bullpen and less-than-sold starters, it's time for John Gibbons to shorten his leash and bring in the relief corps earlier in the game to not force the batters to constantly have to battle back up a deep hole. The batters did get a ninth-inning rally, scoring two runs off of Tommy Hunter, but it was too little, too late.
Jays of the Day! J.P. Arencibia (+.117) despite TOOTBLAN.
Suckage Jays: Mark Buehrle (-.450), Jose Bautista (-.132), Rajai Davis (-.090) was close, but I'm in a bad mood so he gets it too.
The Blue Jays are playing again tomorrow at 4:05 pm. Todd Redmond will face off against Jason Hammel. I think I'm ready for four games without Blue Jays baseball next week.