Who Are Ya: Jason Hammel (Take Two)

Share All sharing options for: Who Are Ya: Jason Hammel (Take Two)

Jason Hammel goes up against Todd Redmond today in a pretty boring pitching match-up. Hammel has been horrible this year with a 5.03 ERA as throwing fastballs almost two thirds of the time has caught up to him. His most used off-speed pitch, the slider, hasn't been getting whiffs making Hammel pretty one-dimensional. Left-hander hitters have been pounding him and as you can see he's always missing up and away as I noted in the first preview of him as well: 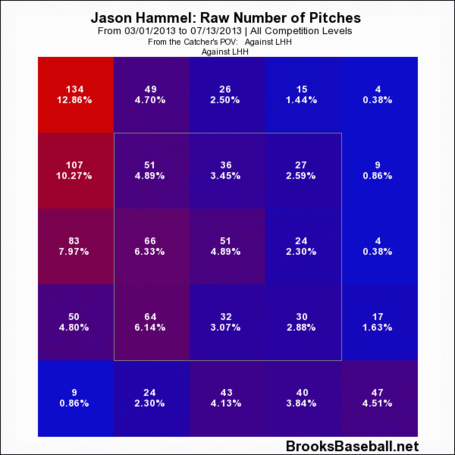 His heavy usage of the sinker early in the season has given way to more four-seamers, which may be part of the reason his ERA has skyrocketed: 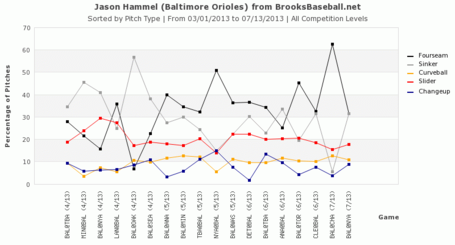 The lineup I'd like to see against Hammel would be:

As you can see, this lineup would include 7 left-handers, which is clearly a weakness for Hammel. The Blue Jays wouldn't be the first team to stack the lineup with opposite handed batters against the Baltimore right-hander this season: 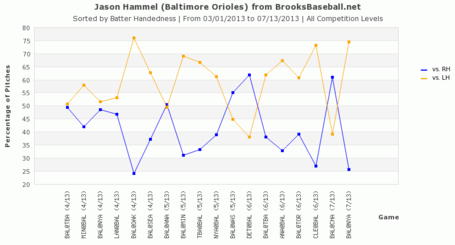 For the "Find the Link" today:
Find the link between Jason Hammel and the hitting coach of the Blue Jays.

Enjoy the game (or your Saturday if you can't bear the torture anymore) and let's see a win please Blue Jays.