Tonight, with the Home Run Derby, begins the great pageantry of the All-Star Break. With the Blue Jays sitting in the cellar of the American League East at 45-49 and 11.5 games back, I think the club would enjoy some time away from baseball before preparing for the 68 remaining games of the regular season.

Earlier in the season, with the talented Blue Jays mired in a horrific start, there was some talk optimistically comparing this team to the 1989 version. As you may probably know the 1989 Blue Jays started off slowly, and reached a nadir of 12-24 before then-general manager Pat Gillick dismissed then-manager Jimy Williams and hired then-batting coach Cito Gaston as an interim replacement. Well, under Gaston, the Blue Jays started improving (although it may largely be due to regression) and ended up finishing the season 89-73 and winning the East.

Now that the 2013 Blue Jays have reached the All-Star Break, I thought it would be a good time to check out how they are doing compared to the 1989 Blue Jays at game 94 of the season. I was quite surprised at the result (click to make it bigger so you can print it and hang it on your wall): 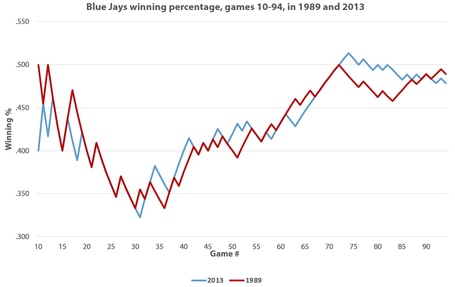 What this graph shows is that the two Blue Jays clubs had almost identical seasons (win-loss record-wise, at least), going through ups and downs at pretty much identical points during the season. At game 94, the 1989 Blue Jays were 46-48, in third place, and 8.5 games behind the division-leading Orioles, so that team wasn't in as bad of a hole, and the division wasn't as strong as the one the current team has to contend with. The Blue Jays would have to go 44-24 to match the 1989 team's record, and 89 wins might not be enough to win the wild card this season. So don't hold your breath for the Toronto to capture the East in 2013, but this just might make you think that not only is a playoff run possible, this club has actually done it before. (Note: I only looked at winning percentage from 10 games on because it would fluctuate too much for each win and loss before that.)

A couple of baseball-related events in Toronto to announce: Bluebird Banter, Left Field Brewery, and Tall Boys Craft Beer House have come together to organize The Diamond Club this Thursday, July 18 at 7 pm. For just $25 entry (click on the link to find where you can get a ticket), you will get a buffet dinner cooked with Left Field's ales, Left Field drink samples, as well as a chance to participate in a baseball trivia game show, and watch a screening of Major League. On top of all that, I will be there! Next Thursday, our friends at Blue Jays Way are hosting their third Thirst Base Thursdays at Riverside Public House, again collaborating with Left Field Brewery.

Not too many Blue Jays-related posts today as most writers are probably speeding off to vacation or the All-Star game, but there are a few notes of note:

What To Do With Josh Johnson? - AL Eastbound & Down
Over at AL Eastbound & Down is a piece on what the Blue Jays could potentially do with Josh Johnson. He has looked horrible this year, but he has had a 13% HR/FB rate (actually 14.7% after Sunday's affair). His actually lowered his xFIP to 3.57. Maybe Johnson will enjoy some much-needed regression time in the second half. Nonetheless, I don't believe he has much value at the trade deadline. Unless he does catch fire as his ERA slides towards his xFIP, he probably won't get a multi-year extension that he would like. So the only thing left to do is to take a $14 million flyer on him at the end of the season.

A Tale of Two Richards - Blue Jays Nation
Brandon Nickel recaps Ricky Romero's Sunday outing with the Buffalo Bisons. Romero went eight-strong, giving just one run on four hits while striking out four and walking a single RailRider. Nickel wants Romero to "flourish" with the Bisons before the Jays call him back up, and I agree that would be the best for Romero. However, the Blue Jays are still sorely lacking a fifth starter. At this point, would I want to try to bring up Romero instead of tossing Todd Redmond out every five days? Probably not--yet. Eventually he'll need to return to let the Blue Jays evaluate him against major league hitting. (Of course, Romero's first name is Ricardo and not Richard but that's besides the point.)

Negrych becoming versatile in hopes of a call-up - The Buffalo News
Rodney McKissic profiles AAA All-Star Jim Negrych's development from a second baseman to a utility player who can play third and left field as well. Later on in his piece McKissic mentioned that Gose is looking better at the late, but his eight-game hitting streak was snapped on Sunday when he went 0-for-4. He is now batting a paltry .257/.279/.314.

Glenn Homers to Beat Phils, 7-5 - New Hampshire Fisher Cats News
Right fielder Brad Glenn was the hero for the Fisher Cats on Sunday, hitting a game-winning two-run homer to break a 5-5 tie in the top of the 12th inning. Marcus Stroman started it, giving up two runs on just four hits over six innings of work. He struck out five and walked two, throwing 100 pitches, 62 for strikes. Ryan Schimpf is now hitting just .220 after an 0-for-6 day.

Jimenez an important asset for Blue Jays - Sportsnet.ca
Catching prospect A.J. Jimenez is now probably the best position player prospect in the Blue Jays' system, with a struggling Anthony Gose and a upward-moving Kevin Pillar trailing behind. Shi Davidi speaks with him and assistant general manager Tony LaCava about Jimenez's development. The young catcher, who is batting .361/.390/.474 in 105 plate appearances for the Fisher Cats a year removed from Tommy John surgery, is actually still more focused on defense. Jimenez prides himself on his blocking ability, and LaCava praised him on his ability to throw out runners on the bases.

Toronto Blue Jays catcher prospect A.J. Jimenez savors Futures Game - BlueJays.com
Chris Iseman also got a chance to catch up with Jimenez and also recapped his performance in the Futures Game on Sunday. Jimenez grounded out in the first and walked in the fifth.

Lugnuts' bullpen keeping things fun - MiLB.com News
The Lansing Lugnuts have been having a trying year (they are 5-18 and in last place in their division of the Midwest League), but baseball is still about having fun. The members of the Lugnuts relief corps keep it light with a unique routine on their walk out to the bullpen. And of course it was Ian Kadish, the joker that he is, who came up with it.

Trevor Gretzky heads to B.C. for baseball series against Vancouver Canadians - The Globe and Mail
This weekend, near-capacity crowds went out to Nat Bailey Stadium to watch every game of the five-game series between the Vancouver Canadians and Boise as the Hawks brought a long an outfielder with a very famous name. Trevor Gretzky, son of the Great One, was drafted in the seventh round of the 2011 draft by the Cubs. He spent last season with the Arizona League Cubs and was promoted to the short-season A affiliate this year. Hawks manager Gary Van Tol is Canadian and made sure that Gretzky got to be in the lineup for every single one of the games in Vancouver. The 20-year-old Gretzky did not disappoint his manager, getting at least a hit in all five games north of the border. He came into Vancouver with a .207/.207/.241 slash line and came out of there hiting .277/.304/.581. In Sunday's game, Boise beat Vancouver 3-0 in front of 5,157 fans. In case you're wondering, the younger Gretzky wears a single "9" on the back of his Boise uniform.

The Céspedes saga - San Francisco Chronicle
If you read but one link from this post, make it this (I made it big so you'd see). Susan Slusser and Demian Bulwa tells the story about the harrowing journey through hell that Yoenis Céspedes's family had to go through in order to join the Oakland A's star in the United States. It involved being arrested multiple times, a fatal traffic accident, a desert island in the Caribbean, and 103 days spent in a jail. Tip of the cap to Tyler Bleszinski for the link.

Garza informed he'll likely be dealt: Texas, Indians, Red Sox, Cards in mix - CBSSports.com
Jon Heyman has heard something different than Bruce Levine: the Blue Jays are not among the leading suitors for Matt Garza. Of course it makes no sense for Toronto to overpay for Garza, but I also believe that Alex Anthopoulos is the type of GM who would at least ask and probe for his market price.

Mets' Jordany Valdespin reportedly called manager Terry Collins a c___sucker, demanded to be placed on disabled list - Amazin' Avenue
Mets' utility guy and problem child Jordany Valdespin was apparently unhappy when he was demoted to AAA Las Vegas, so he called his manager a really bad word and asked to be placed on the disabled list. Because of acute offensive suckage(his batting line: .188/.250/.316, .253 wOBA, 59 wRC+) or something. Apparently, according to Adam Rubin, there is still more to come. Fun times in Mets land! Can you imagine if one of the Blue Jays' players called John Gibbons that name? I mean, how many years will Gibby have to serve?

Issues With Bodies, Swimsuits And Beauty - Fanatico
Dustin Parkes nails it with this piece over at Fanatico. I had wanted to write something up about this "The Beauty of Sport" special Sportsnet is debuting tonight at 7 pm, right before the Home Run Derby preview show. The preview ad (if you haven't seen them during Jays games, Parkes embedded it) showed three women, who are apparently professional soccer players. I had no idea that they were athletes, because I only saw them as "hot babes in bikinis at the pool," as some bro described them in the commercial. I know it's not fair for me to judge a show before watching it, but I don't actually plan to watch it.

I stumbled upon this on the weekend: a Toronto Daily Star article on how this newfangled nuclear science could warm up Canada enough to have Californian weather... on the same day that Nagasaki was bombed. It is a fantastic piece because there was basically no thought into how radically changing the climate would affect anything other than humans.