The All-Star Game goes tonight at 8pm with four Blue Jays taking part. The starting pitcher for the American League is Max Scherzer who I previewed a few weeks ago here. Mets' fans rookie prodigy Matt Harvey goes for the National League, who have won the past three years with the AL winning the 12 years before that (plus a tie). If you don't know who Matt Harvey is, neither do a lot of New York Mets fans:

Harvey throws the four main pitches relying heavily on his high 90's fastball. His three solid off-speed offerings all record whiffs on about a third of hitter's swings. 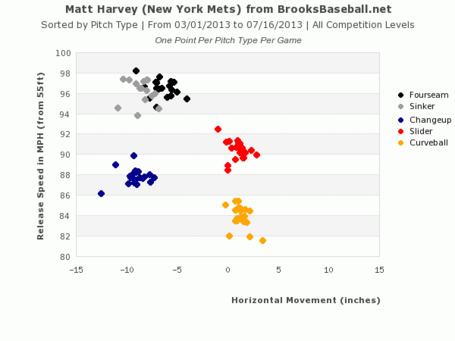 Cool GIF incoming! (Click the GIF if it doesn't show up here)

The full rosters for the game are below:

I could go on a rant about Chris Tillman being in this game, but I'm not sure anyone cares.

The last time the Blue Jays had four representatives in the All-Star game was 1994, although they had five in 2006.
I'm personally pretty excited about watching this game, which seems to go against popular opinion these days as the game is oft-criticized. The lineups this year are ridiculously star studded with less obscure players than usual it seems.

Join us in the comments to talk about the game or any other things that suit your fancy.