Who Are Ya: David Price (Take Two Post DL)

Real baseball is back as the unofficial second half of the season gets underway tonight at the Rogers Centre. David Price goes for the Tampa Bay Rays, while Esmil Rogers starts for the Blue Jays. Price faced the Jays for the first time this season on May 9 going eight innings allowing two earned runs (four total) on seven hits. The big left hander had eight strikeouts in the game that the Rays won 5-4. In the very next start against the Red Sox, Price suffered a left triceps strain that wasn't supposed to be serious, but kept him sidelined 47 days before starting again for Tampa Bay on July 2nd.

In the three starts since coming off the extended 15-day DL stint, Price has been much better allowing only three runs in 25 innings, including two complete games! In those starts he's also had zero walks and only allowed 19 hits, simply dominating the weak offenses of the White Sox and Houston (twice).

All of the Tampa Bay Rays' staff was quick to say that the injury to Price wasn't serious when it occurred, but it's pretty clear that it had been messing with him. Before the DL stint Price was constantly missing the zone, but since coming back his CY Young control seems to have returned: 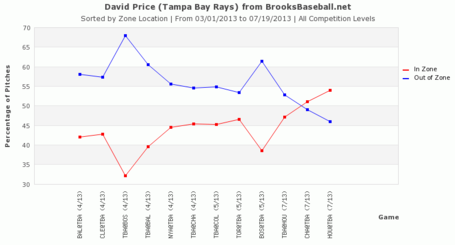 Left-handed hitters still can't hit David Price and it'd be wise for the Blue Jays not to stick Adam Lind in the lineup simply because the team is coming off a four day break. The lineup I'm hoping for would be:

That would get the Blue Jays eight right-handed batters in the lineup, which is the same number they had the first time they faced Price on May 9. As you can see, most teams have done everything they can to stack their lineups with opposite handed hitters against the tough lefty: 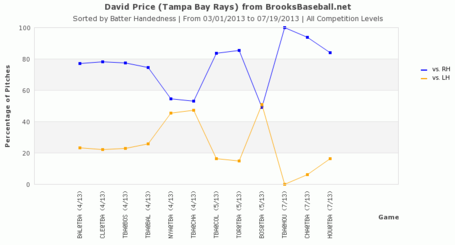 Find the link between David Price and the player packaged with Ian Stewart for Tyler Colvin in the Cubs-Rockies swap of 2011.

This is a tough first test coming out of the All-Star Break for the Blue Jays, should be an interesting game.