The thunderstorms that rolled into the Toronto area just before game time caused a power surge down at the Rogers Centre, where the Toronto Blue Jays and the Tampa Bay Rays combined to hit eight home runs in a 8-5 loss for the Blue Jays. Rays starter David Price came in to Toronto on the heels of three solid starts since his return from the disabled list in early June--two against the Astros and one against the White Sox. His competition would be much stronger tonight.

The Jays took flight early, with an Edwin Encarnacion solo shot right after Jose Bautista made a loud out to the warning track. In the bottom of the third, David Price completely shatters Colby Rasmus's bat with a 96-mph fastball. The ball rolled past he pitcher's mound in fair territory, but Rasmus just stood in the batter's box. The Rays completed the play by stepping on first and left the field, but Rasmus turned to umpire Jeff Nelson and told him that the ball was actually fouled off his shin. The four men in black gathered together to confer, then ruled correctly in Rasmus' favour. But after all that kerfuffle, which included Joe Maddon coming out to argue for several minutes, Price needed just one more fastball to strike him out. 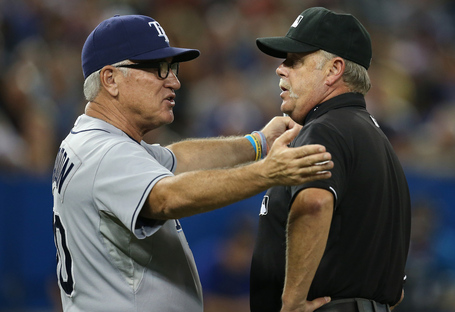 In the third, the Rays struck back against Esmil Rogers, with a Ben Zobrist solo shot to right. The Blue Jays broke the tie right away in their half, J.P. Arencibia slammed a Price cutter to dead centre, right "above" the fake Acura ad that Sportsnet has up on their broadcasts. Up next was Brett Lawrie, who hit a line drive right at second baseman Ryan Roberts for an out. Jose Reyes then singled then stole second base after several pickoff attempts by Price. But that didn't end up mattering as Jose Bautista hit a no-doubter over the wall for a two-run shot to put the Jays up 4-1.

David Price then settled in after the third, retiring the Jays in 1-2-3 fashion in the fourth, fifth, and seventh, allowing just a Rasmus infield single in the sixth. As Price settled, his offense started chipping away at the Jays' lead, with three solo homers by Wil Myers, Evan Longoria, and Kelly Johnson, tying it up at 4-4 in the sixth.

The Rays threatened in the top of the seventh. After a Zobrist double to the wall against Dustin McGowan, John Gibbons called for the intentional walk to Evan Longoria to bring in All-Star reliever Brett Cecil. Cecil couldn't find the strike zone against Luke Scott, walking him on four pitches including a couple in the dirt., but got out of it when he induced Wil Myers to fly out to leave three on board. The Rays tried again--and succeeded--in the eighth. Kelly Johnson started it with a single against Cecil. Gibbons then brought in the other All-Star reliever Steve Delabar. The first batter he faced, Sean Rodriguez, put down a perfect two-strike sac bunt to advance Johnson, who scored on a Ryan Roberts single to left field. A wild pitch later, Desmond Jennings doubled in Roberts to give the Rays a 6-4 lead. Tampa Bay used the long ball to tie the game, then took the lead with bunts and doubles.

That Roberts single wasn't hit too far from where Maicer Izturis was playing at third. It would've been a difficult play, but perhaps someone with better range (like Brett Lawrie) could've gotten to it. Lawrie did move to third in the ninth, after Emilio Bonifacio came into the game. Lawrie made his first mistake at second base, fumbling a grounder in the second.

In the eighth, the Jays started a rally, but it was extinguished when Evan Longoria caught a Rajai Davis line drive then Colby Rasmus popped up weekly.

On the field, Jose Reyes made two terrible throws to first. The first was ruled an infield single by Zobrist, and the second happened in the ninth on a Myers grounder which led to the Rays' seventh run. A Rodriguez single then led to an 8-4 lead after Rasmus threw the ball far enough from the plate to prevent Arencibia from making a play at the plate.

Lawrie connected with his sixth homer of the season with a solo shot in the ninth.

Overall, it was a disappointing game. The Blue Jays got to David Price early but Esmil Rogers and the normally-reliable bullpen allowed the Rays to climb back one run at a time. The positives: the Blue Jays hit four homers, several balls that were hit hard were caught, and the staff combined for seven strike outs, giving the crowd of 33,266 each a free slice of pizza. The negatives: Rogers giving up four homers, a couple of pitches that went through Arencibia's legs that he could've blocked, the fielding mistakes, and a shaky outing by the relievers.

On to tomorrow's game.