Who Are Ya: Doug Fister (Take Two)

Share All sharing options for: Who Are Ya: Doug Fister (Take Two)

Doug Fister gets his second look at the Blue Jays tonight going up against Chien-Ming Wang. Fister first faced Toronto on April 11th going 8 innings allowing 1 run on 5 strikeouts in what turned out to be an 11-1 victory for Detroit. Since that game, Fister has continued to pitch pretty solidly resulting in an ERA of 3.50 and a FIP of 2.82. With a ground ball rate of 56.7% and only 4 home runs given up in 103 innings expect Miguel Cabrera and Prince Fielder to get a (much needed) workout tonight fielding grounders off of Fister's sinker.

On the April 11th game against Toronto Fister had his curveball working, which is key for his success. He threw it for strikes two-thirds of the time getting Rajai Davis swinging for a strikeout on the looping pitch: 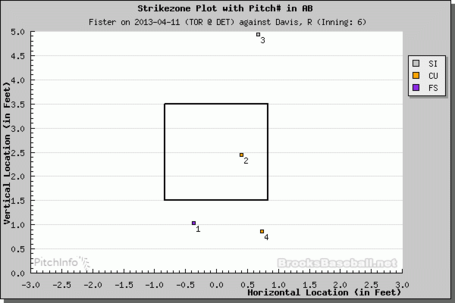 During that game Fister focused on the arm-side part of the plate and that pattern has held true during the whole season, consistently jamming right handers with his sinker: 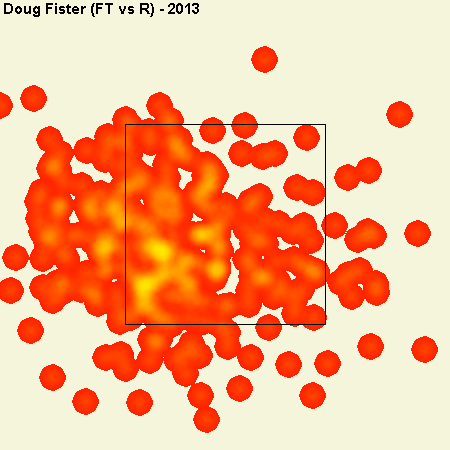 nope. stick a fork in ‘em, they’re cooked. Hate to say it, because I thought that the changes were going to make a real difference.But the pitching staff is just not good enough to challenge in the AL East.Another fourth place finish, 10 ~ 15 games out.And with the minor league cupboard bare, we won’t have another sniff (does this one even count?) for awhile.

It's not really clear who's injured so making a lineup wouldn't be an easy thing to do.

Find the link between Doug Fister and the Detroit Tiger catcher who saw the third most games at that position in the 2008 season.